The Bottom Line: Original, audacious and raw. A truly dark treat for fans of the serial killer genre. 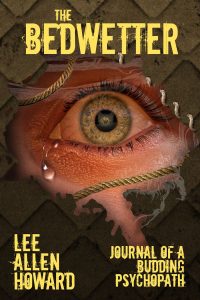 Russell Pisarek, the budding killer at the heart of The Bedwetter, is truly in a class of his own. Should Lee Allen Howard’s The Bedwetter be adapted for TV, the money line in the series trailer will surely be, “I could care less about skinning this cat. That’s kid stuff, and it’s all behind me now.”

Now he fantasizes about finding a woman who he can shave bald. Readers will vacillate between wishing Uma, the objection of his affections, should run or stay put, just so they can see what new kink Pisarek will come up with next. And if you’ve ever wondered about the difference between the Tooth Fairy and the Piss Fairy, you’ve come to the right place.

Told from Pisarek’s view, Lee Allen Howard’s prose crackles with an energy that is rare and refreshing in the genre, which is typically dominated by investigative voices. Pisarek is incredibly well drawn, managing to be both outrageous and yet completely believable. Highly recommended for fans of truly dark fiction.