The Bottom Line: A wonderfully claustrophobic murder mystery with a razor-sharp amateur sleuth. 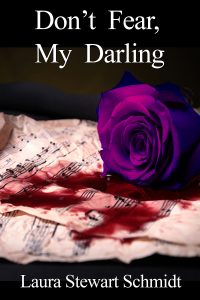 As long as there have been artists, there have been long-suffering personal assistants. But author Laura Stewart Schmidt, author of the deftly-written Until Proven Innocent, manages to deliver plenty of surprises in Don’t Fear, My Darling. In 1987, twenty-two-year-old Louisa Berry is desperate for a job, leading her to apply for a position as a live-in secretary to elderly novelist Marguerite Roberts. As she begins her first day, she convinces herself that it can’t be worse than the three jobs she has been fired from.

As she settles into the creepy home in a community outside Seattle, it doesn’t take long for Louisa to discover that the needs of her employer will be the least of her worries. Marguerite’s family is downright hostile, and one of them is a potential murderer. In Schmidt’s capable hands, relatively minor but telling events – like when Marguerite’s wheelchair goes missing – seem genuinely threatening. Once Louisa realizes that mortal danger lurks within those walls, the novel becomes impossible to put down.

Meanwhile, the novel’s underlying storyline is Louisa’s personal struggle to find her way in in the world. Born of Yakima heritage, and heavily influenced by her late grandfather, Louisa is a college dropout, and may or may not have attention deficit disorder. Nevertheless, her instincts are razor sharp. Set in a time before the Internet or affordable mobile phones delivered an easy pipeline for information or help, her plight in the Roberts home feels especially claustrophobic. This rich characterization sets Schmidt’s novel apart from the pack.

The Bedwetter: Journal of a Budding Psychopath, a Highly Recommended Thriller by Lee Allen Howard
The New Holy Warriors, a Compelling Christian Thriller by Alice Sandoval