The Bottom Line: This stellar mountain murder mystery will stick with you long after turning the last page. 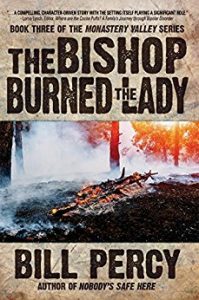 In Bill Percy’s vivid new novel, a devastating Montana wildfire season has worn out Deputy Andi Pelton and her boyfriend, psychologist Ed Northrup. But there will be no rest anytime soon, as they are tipped off about a mysterious fire in a remote forest clearing. They discover a few charred ribs, a collarbone, a partial skull and jawbone, as well as tire tracks from three vehicles and the prints of bare human feet.

Fans of Percy’s Nobody’s Safe Here, one of our Best Thrillers of 2017, won’t be disappointed by this new addition to his Monastery Valley series. Pelton has grown both as a character and as a sleuth, and Percy serves her some tasty clues that indicate possible cult activity, including the telltale signs of cult sacrifice. The narrative pacing picks up considerably when the duo come across a remote compound. The old carpenter-in-residence swears that he’s the only inhabitant, but Pelton knows that’s a lie. Pelton, who was shot in the line of duty once before, won’t back down from an unsolved mystery.

Percy invests significant page time developing the relationship between Pelton and Northrup, and it only adds to the already high stakes of this Montana murder mystery. Overall, the juxtaposition of a complex puzzle – complete with coded messages – and Percy’s high-altitude landscape makes for a winning combination.