The Bottom Line: This cozy mystery has it all – romance, suspense, comedy and a detective you’ll fall hard for. 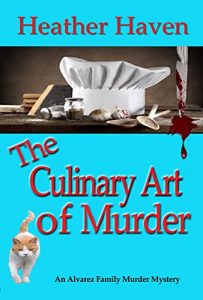 The latest installment in Heather Haven’s Silicon Valley murder series begins as Liana Alverez – better known as Lee, a private investigator for Discretionary Inquiries – takes a call from her distraught uncle. Like every great fictional detective, Lee is just one degree of separation from an accused murderer. In this case, the alleged killer is Patsy Durand, a chef her uncle is romantically involved with.

True to her name, Patsy maintains her innocence, indicating the possibility that she has been framed for the murders of a fellow chef and dishwasher. To make matters worse, she has already told at least one lie to police. Fortunately for Patsy, Lee would do just about anything for her uncle.

As detectives go, Lee isn’t particularly aloof or eccentric, but she does have a few entertaining quirks, such as the way she picks up the vernacular of her suspects (“…this word ‘lawdy,’ it’s southern for Lord, right”?) like a sponge and uses it in every conceivable situation. She also holds a special inexplicable hatred for seemingly innocuous things, such as double-paned windows and the color beige. In short, she has a distinctive point of view that’s entirely unique and endearing.

Haven uses a series of unobtrusive techniques to ensure that this, the sixth installment, is a perfect entry point to the series. Within the first bite-size chapter, we know who Lee is, what she stands for, and what kind of world she inhabits – while still managing to surprise in almost every chapter (fried squirrel, anyone?).

A quick read, you’ll polish off The Culinary Art of Murder on a long flight and be ready to download another series book when you land. But keep your flight attendant close. With food descriptions this mouth-watering, you’ll be snacky the entire way.

Zyklon, a Timely Political Thriller by John Hazen
The Moving Blade, One of the Year’s Best Thrillers, by Michael Pronko