The Bottom Line: A brazen political thriller for our times. Timely, spellbinding and entirely plausible. 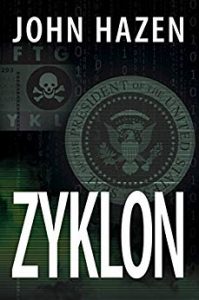 The follow up to John Hazen’s brilliant novel, Fava (which made our list of The Best FBI Thrillers), centers on a reporter chasing both a serial killer and an incendiary presidential campaign.

Told from the point of view of TV news anchor Francine Vega, Zyklon opens as Vega introduces the story of how a fellow reporter following presidential candidate Reverend Malcolm McKenzie was mercilessly beaten at a political rally. The incident happened after the candidate declared war on the “dishonest media” and encouraged followers to “bring them to account” for their lies. McKenzie also happens to be unapologetically anti-immigrant and anti-Islamic in particular. While the idea of a religious figure as a serious candidate for the presidency may be a throwback to a different era of American politics, Hazen is obviously holding up a stark mirror to our current political reality.

Meanwhile, the so-called Zyklon Killer – named for the gas he used to kill his victims – was executed in Texas, thus ending an era in Francine’s journalistic career. Or does it?

In this second outing with heroine Francine Vega, Hazen has pitted the intrepid reporter against a literary house of mirrors full of red herrings and wolves. Hazen’s use of the American social and political divide to ratchet up tension is effective, if jarringly so. By design, Zyklon is no escapist beach read.

Adding to the reality-focused narrative, Hazen takes time to fully realize Francine’s character. When she isn’t chasing killers or dirty politicians, she’s dealing with internal newsroom drama, career backstabbing and concern for her husband, who is a special agent for the FBI (another organization that is under siege in the real world). The result is a believable heroine that readers will fall for.

While Zyklon isn’t subtle enough to convert staunch media haters, it is cathartic for free-speech enthusiasts and a highly entertaining political thriller that is chock full of surprises.

The Death of Vultures, a Dark Psychological Thriller by Susan Wingate
The Culinary Art of Murder, a Humorous Mystery by Heather Haven