The Bottom Line: A mesmerizing FBI thriller set in the Alaskan wilderness. 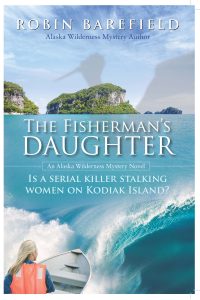 After the bodies of four murdered women are found on Alaska’s Kodiak Island, FBI Special Agent Nick Morgan flies to Kodiak to aid in the investigation. Morgan’s local contact, Alaska State Trooper Dan Patterson, fears a serial killer is at work. But finding the perpetrator won’t be easy. The victims have very little in common with each other, and inclimate weather has left few pieces of forensic evidence for investigators.

Author Robin Barefield, herself a resident of the Alaskan wilderness, is fast becoming as synonymous with Alaska as Dennis Lehane is to New England. As in her first novel, Murder Over Kodiak, the island culture she channels provides an atmosphere that renders The Fisherman’s Daughter completely unlike anything else on the bestseller list.

More than just the weather — driving rain, snow, ice and high wind — it’s the people that inhabit Barefield’s world that set The Fisherman’s Daughter apart from most crime thrillers. The islanders are fishermen, boat motor repairmen, hunters, prostitutes, cannery workers. Real estate agents close during the summer salmon-fishing season. And pilots, who make rapid transportation around the state possible despite relatively high crash rates, are everyday heroes. The overarching effect is a palpable, almost sensory literary experience that is nothing short of mesmerizing.

As for the investigation, Barefield’s characters execute deliciously old-fashioned detective work. The pair interview witnesses who can identify a truck, a person in a child’s drawing, a subtle change in hairstyle. They gather whatever evidence the weather hasn’t erased. And simmering underneath it all is the threat that the perp may strike again. Highly recommended.