The Bottom Line: An explosive police procedural with an endearing hero at its core. Readers will be longing for another Craig Hooper novel. 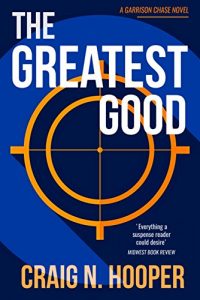 Shamed federal agent Garrison Chase is dealing with some first day on the job jitters. After facing legal issues because of his somewhat unorthodox collection of assault weapons, Chase just landed a new gig as the governor’s son’s bodyguard. Things escalate quickly, however, when Agent Chase himself becomes a target.

Author Craig Hooper brings together Chase’s less-than-savory past with his current situation, creating a fine balance that keeps the momentum barreling forward, much like Hooper’s excellent, cinematic action sequences. Between false leads, internal affairs, and most of — if not all — of his past jobs coming to haunt him all over again (let’s try to forget about an inter-office romance adding another layer to the story), Chase’s ordeal leads readers down unexpected paths riddled with dead ends before a triumphant climax that leaves readers breathless.

As a hero, Chase is as relatable as they come thanks to a compelling subplot involving the custody of his son and the relationship with his ex. Will Chase be able to work his way back into the good graces of the bureau?

Fans of police procedurals will find a lot to love in The Greatest Good, but the family matters underneath it all will appeal to everyone.