The Bottom Line: A powerhouse medical thriller with all the right ingredients: a secret order, illicit wonder drugs and a relentless hero that never gives up. Highly recommended. 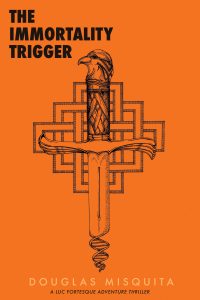 Nazi Germany, 1945.  As a ragged group of loyal soldiers await the inevitable Allied invasion, hope for the Third Reich is all but lost until SS Oberstgruppenführer Frederick Mauer arrives in one of the country’s last remaining aircraft. After an inspiring speech, Mauer leads a small company of men on a mission to Schloss Schwarzer Adler, Castle of the Black Eagle, nestled deep in the Black Forest. They arrive just before the Allied raiding party, where the remaining survivors fight to the death in order to allow Mauer to escape to a laboratory deep beneath the castle. Mauer is unfazed by the circus of medical horrors awaiting him in the castle laboratory, telling the geneticist Hauptsturmführer Stahl, “We must implement our contingency plan.” He is speaking, of course, of the Vesuvius Group. Then he vanishes without a trace.

Cut to Africa in 2014, where Douglas Misquita’s cinematic fifth novel is no less gripping. What is the Vesuvius Group?What happened to Stahl and Mauer?  Is there any connection between the castle laboratory and modern-day drugs designed to enhance human longevity being tested in China, Colombia and elsewhere?

INTERPOL has made dismantling the Vesuvius group a long-term goal, concluding that mercenary Luc Fortesque the man for the job witnessed the attack that eliminated most of the Group. The former head of security for Future Energy Group, Fortesque is a physical, scrappy hero who’s willing to take a punch – or 100 – to give one. But he’s also analytical enough to tie together the book’s many far-flung narrative threads. Fans of Lee Child are going to love Fortesque (and want more of him).

As he did in his spectacular thriller about the global migrant crisis, Diablo, Misquita’s writing doesn’t so much flow as it growls. Each action sequence is felt fully, and with a storyteller of Misquita’s caliber, you just may need Dramamine before the first chapter is done.

The Wife Between Us, a Crime Thriller by Greer Hendricks
One of Us, an Essential YA Whodunnit by Karen M. McManus