The Bottom Line: Everything you hope for in an archeology thriller – superstitious lore, Nazis and a spectacular historical artifact that breathes new life into the genre. 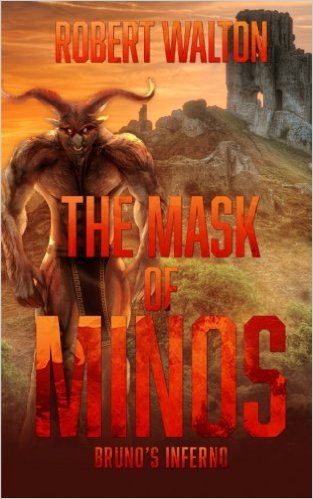 The Mask of Minos opens during Germany’s doomed invasion of Russia in 1941, where two operatives reveal a massive cloak and dagger effort to possess a rare and powerful artifact. Given the book’s title, it’s no spoiler to reveal that they’re looking for one gnarly piece of headgar. Much like the Spear of Destiny, which was sought after by conquerors ranging from Constantinople to Hitler, the Mask of Minos is said to make its bearer’s army invincible.

Meanwhile in the present day, brilliant archaeologist Harry Thursday returns in Robert Walton’s second novel in the series. The lone survivor of an harrowing expedition in Peru, it seems that Thursday has recovered nicely in matters of love (when he wants his lover to make him a drink, he simply shoves his glass between her breasts – priceless!). But Thursday soon finds himself swept up in the hunt for the mask that generations of archaeologists have embarked on before him. Can he succeed where they failed?

The cinematic prose that elevated Walton’s first novel to uncommon heights are on full display here, as he deftly immerses us in treacherous European winters and an ancient castle in the Alps. While Walton delivers just enough backstory for the legend of the Mask itself, readers bringing ample knowledge of World War II history will get more out of the nuances of Walton’s plot and characterization.

Clocking in at an efficient 236 pages, The Mask of Minos is a quick read, and can be easily enjoyed even by those that didn’t catch Walton’s first novel, Fatal Snow. Highly recommended for fans of Douglas Preston and James Rollins.