The Bottom Line: A powerful medical thriller about the ethics of organ transplants, the desperate world of donors and the people who control the system. 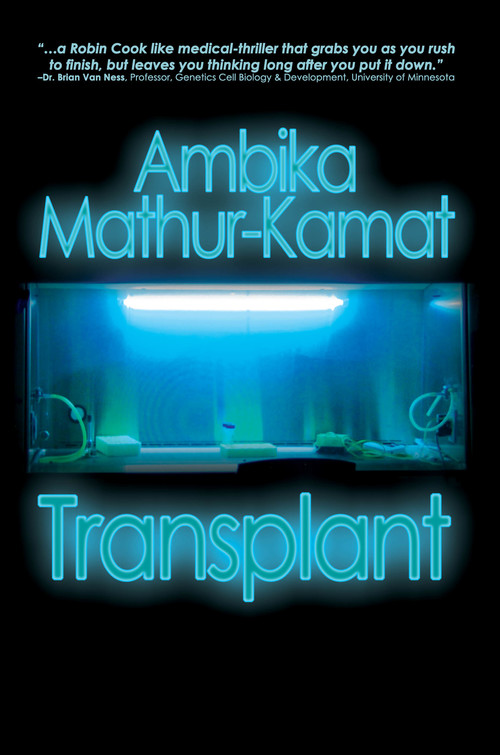 At Michigan’s Mount Carmel University, a world-famous organ transplant team prepares a patient for a liver transplant. Suddenly, a woman suddenly appears in the operating room with a gun. She claims that her son, who is near death elsewhere in the pediatric ICU ward, was in fact at the top of the donor recipient list. She intends to hold the transplant team leader at gunpoint until the organ is put into her son’s body.

The delicate business of organ transplants is the focus of Ambika Mathur-Kamat’s emotionally powerful medical thriller, Transplant. While the subject been well-covered in mainstream thrillers (perhaps most notably in Netflix’s House of Cards and the film Dirty Pretty Things), MathurKamat delivers a large cast delivering a multitude of perspectives to the topic, the culmination of which are extremely powerful within the context of a thriller. Told from multiple points of view, research scientist Sheila Kumar observes that the mother “Was a sweet, laid-back woman. I don’t want her remembered as a crazy woman who went on a shooting spree.” Leslie, a hospital volunteer who commits suicide under mysterious circumstances, quietly observes how unfair life is when learning that the intended recipient of a liver transplant ruined his last one with alcohol abuse. And then there’s the scientist running the show from the background, who views the world-class operation that he built as putting “that bucolic little town” and the university itself on the map.

It’s up to Sheila, who went to work at Mount Carmel despite the protestations of her marriage-minded parents in India, to find out what’s really going on. Mathur-Kamat nicely eases her into the role of accidental sleuth while still wrestling with themes of marriage and societal expectations. The author, herself a Professor of Pediatrics and Dean of the Graduate School at Wayne State University in Detroit, has created a fully believable world that gets more engrossing with each succeeding chapter.

The Mask of Minos, Everything You Hope For in an Archeology Thriller
Interference, a Mystery by Amélie Antoine