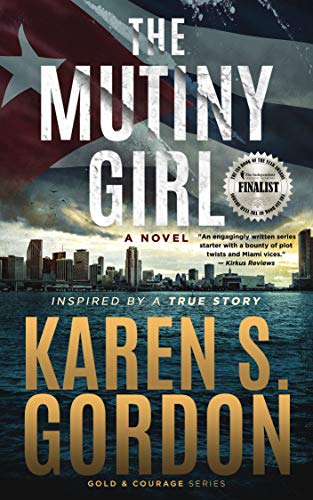 Struggling attorney Vance Courage is deep in debt, lives in a crappy Miami apartment and drives a Nissan Cube. The transition from his former life as an ex-cop to the legal profession has hardly been a smooth one. As if this mid-life crisis wasn’t depressing enough, Vance is also navigating the dismal world of online dating, and his father just died. What else could possibly go wrong?

His fugitive uncle, Tony Famosa, who has been near the top of the FBI’s most wanted list for two decades, suddenly moves in next door. Uncle Tony has been hiding in Cuba since being charged with running a massive drug cartel two decades ago. The case ended in a mistrial when the federal judge was mercilessly gunned down. Meanwhile his business partner, Chago Marino, has spent years in jail, and there’s a rumor that his life is in danger.

Uncle Tony offers to make Vance a rich man. All he has to do is get a message to Ray Dinero, via someone named Lauren Gold. On the other hand, turning Uncle Tony in to the FBI would yield a massive reward.

If only Vance’s choice was that simple. Author Karen S. Gordon has populated Vance’s world with a cast of believable, vivid characters whose relationships to Vance are appropriately complicated. Among them is Sarge, his former police partner, who has a photo of the “Mutiny Girl” – the victim of a case that was never solved – as his Facebook profile. It’s obvious from the eponymously named book title that this unsolved case will loom large in the plot, but Gordon’s story is anything but predictable.

In the book’s opening chapters, Gordon takes her time creating Vance’s Miami, a world filled with a massive circle of eclectic family and acquaintances, the shame of his current life and Cuban American culture, set during the brief period of normalized American-Cuban relations during the Obama administration. As Sarge complains to Vance, “Every relative remotely related to me is coming over on visas courtesy of Uncle Sam. It’s worse than the Mariel Boatlift. I have six raft monkeys sleeping at my apartment.”

Then there’s The Mutiny, a real-life hotel where Gordon worked that was a hotspot for celebs, the Cuban cartel and the feds trying to catch them (several of the fictionalized characters are based on real-life people she encountered). The scenes revolving around this one-of-a-kind landmark are riveting. At times, Vance is reminiscent of Breaking Bad’s Saul Goodman, with his plans for an ad campaign to jumpstart his flagging law career and morally conflicted life path. As Vance makes his choice and goes on the offensive, the book’s pace picks up, charging toward a satisfying payoff that sets the tone for the second book in the Courage and Gold series.