The Bottom Line: If you haven’t caught Harry Bosch fever yet, I dare you to read The Night Fire and not be hooked. 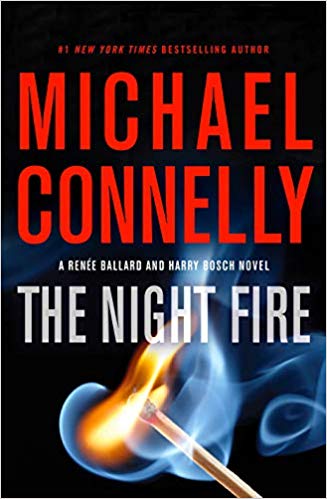 Amazon doesn’t provide ratings information on its magnificent Bosch series, but going by the success of Michael Connelly’s Bosch books, it’s bound to be a juggernaut. The Night Fire is a more-than-worthy volume in the expansive book series, and a decent entry point for anyone who doesn’t have time to go back and start from the series’ beginning

(NOTE: as an extra inventive for fans of the TV series, the audiobook version of The Night Fire is wonderfully narrated by none other than Bosch actor Titus Welliver!)

Bosch’s mentor, John Jack Thompson, is dead.  Thompson’s widow gives Bosch a murder book, one that Thompson took with him when he left the LAPD twenty years before: the unsolved killing of a troubled young man.

Bosch takes the murder book to Detective Renée Ballard and asks her to help him discover what about this crime lit Thompson’s fire all those years ago. As she begins her inquiries – while still working her own cases on the midnight shift – Ballad finds aspects of the initial investigation that just don’t add up.

The bond between Bosch and Ballard tightens as they become a formidable investigation team. And they soon arrive at a disturbing question: Did Thompson steal the murder book to work the case in retirement, or to make sure it never got solved?

As with all the books in the Bosch series, we get a gritty, realistic-seeming day-to-day police procedural wrapped wonderfully in a hard-boiled, contemporary noir wrapper. What’s surprising here is that Bosch’s character still has so much to give. After this many volumes, coming up with believable surprises about Bosch’s core values or behaviors would seem like drawing blood from a stone, but Connelly has done just that. For readers who care about having a strong female co-lead, Connelly delivers on that, too. Bravo!

Requiem For The Dead, an Electrifying Military Thriller by Victor M. Alvarez
In the Heart of the Fire, a Hot New Thriller by Dean Koontz