The Bottom Line: Based on a true story, this World War II adventure is the American answer to All The Light We Cannot See. Highly recommended. 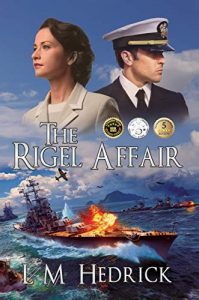 The Rigel Affair tells the globetrotting adventure of impoverished orphan Charlie Kincaid, who escapes an abusive life on a Mississippi cotton farm. After surviving boxcars and dockyards, Charlie ends up in New Orleans, where he joins the navy a year before the Japanese attack on Pearl Harbor draws the U.S. into the Second World War.

Meanwhile in New Zealand, Mattie Blanc, the daughter of well-to-do socialites, is savagely raped by a family acquaintance.  When war breaks out, the family fears invasion by the Germans and Japanese, ultimately leaving their quiet villa for Auckland, where Mattie plans to enroll in hairdressing school.

Like Anthony Doerr’s All the Light We Cannot See, LM Hedrick’s lush novel about the wartime relationship between two young people, told in alternating points of view, focuses on the timeless themes of courage, love and survival. Hedrick’s gift for historical writing tugs at heartstrings while offering waves of suspense throughout. In particular, the early chapters — in which both Charlie and Mattie show their mettle against older predators — work especially well. Impeccably written and researched, The Rigel Affair – named after Kincaid’s ship – is a big tent book that will appeal to readers from all walks of life. Highly recommended.