The Bottom Line: Harry Potter meets The Hunger Games. Sadly, there’s no audiobook version, so fans will have to devour this book the old fashioned way. 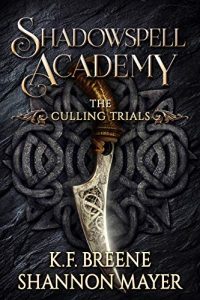 We’re not in Texas anymore, Bluebell. In the opening chapter of Shadowspell Academy, the compelling farm girl known as Wild says, “My family got kicked more often than most.” That turns out to be the understatement of the year.

Wild’s younger brother is chosen for a dangerous game at a place called The Academy. He’s chosen in the form of an invitation, but as they say in the Godfather, it’s an offer he can’t refuse. The price for not showing up? The death of the entire family.

This time, she’s going to take matters into her own hands. Wild resolves to cut her hair and go in her brother’s place. As she says, “Magic and monsters are real. Assassins are coming for me, and the dead are prone to rise. What’s a girl faking it as a boy supposed to do? Beat the academy at its own game.”

With Shadowspell Academy, Shannon Mayer, the author of The Rylee Adamson series, may just become a household name.