The Bottom Line: An intoxicating thriller that has it all: murder, romance, sports and politics. Fans of Harlan Coben’s superb Myron Bolitar series will love Touched Back. 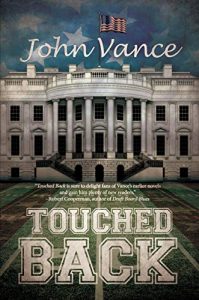 When the president’s brother-in-law is gunned down at the university where he coaches football, the murder sends shockwaves throughout the school’s Washington D.C. alumni. Unfortunately, the first family has little time to grieve. The killer is just getting started, and as the death toll mounts, it’s clear that the victims are all connected to the university’s football program.

Who else could be on the killer’s hit list? The president himself is an ex-player, and others in his administration have close connections with the program as well. Then there’s veteran Daniel Wells, who was a standout quarterback at the university before he earned his Silver Star while serving in Iraq. What’s more, Wells was once engaged to the First Lady before the relationship ended mysteriously. As law enforcement agencies struggle to come up with leads, Wells – along with his brainy and athletic girlfriend, Andrea – begin their own quiet investigation.

In Wells, author John Vance has created a hugely compelling amateur sleuth whose methods are both unorthodox and unassuming. Wells is the opposite of a prototypical detective. He’s social, well connected and patriotic. In between public appearances –like testifying before congress about fraudulent veterans charities and inept VA healthcare – Wells drinks and dines his way through the book, using the lubrication of alcohol and his natural charm to claw ever closer to the killer. Vance has wisely given Wells an excellent co-pilot in girlfriend Andrea Chase, a tenacious sports reporter who drives much of the book’s investigative analysis.

Vance’s expert pacing grabs from the book’s explosive first chapters, but the book knows when to simmer as well, as a variety of potential suspects are unearthed. Elsewhere, Vance has included plenty of juicy material for hardcore college football fans, including the juicy behind-the-scenes scandals of an up-and-coming program. Highly recommended.