Bottom Line: A sexy mystery that brings the timeless themes of murder, revenge and family loyalty to the high seas. A great series for fans of romantic suspense. 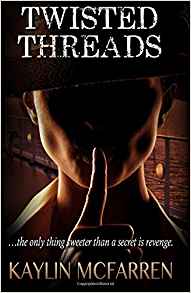 In Twisted Threads, assassin Akira Hamada finds herself owing a life debt to Mitsui-san, a powerful member of Zakura-kai, Japan’s notorious yakuza family. And yet at the book’s outset, she is offered a way out. The price of her freedom? Boarding a cruise ship bound for the Caribbean to exact revenge on a married British couple that murdered Mitsui-san’s sister.

If she’s successful, she can start a new life anywhere in the world. If she fails, her own mother will be killed.

Akira’s role as a reluctant assassin raises the stakes further. She’s vulnerable, with her own heart serving as both a help and a hindrance from the task at hand. Furthermore, she’s talented, with plenty of feminine wiles, but she also realizes she’s not a pro just yet. Her handler, Yuki, reassures her with statistics: “There’s been more than 5,000 deaths on passenger ships and the majority of them are still unsolved. No one will suspect the involvement of a pretty, young tourist.” As we quickly learn, Yuki is correct. Other mysterious murders are bound to happen during Akira’s mission. McFarren’s lightning-fast style and whiplash-inducing plot turns, which are magnified under the book’s timeframe, make for a thrilling experience that will leave readers little time to catch their breath. Setting the plot in such tight quarters requires a lot of imagination (think Murder on the Orient Express). McFarren’s ability to fully explore the space— grand ballrooms, secret stairwells, and staff-only areas— is just what the doctor ordered.

McFarren’s decision to impose a time limit – ten days, playing out over the course of a cruise – is a clever narrative device that gives the novel a sense of looming dread that increases with each passing day at sea. Fans of McFarren’s series will find plenty to love in Twisted Threads, but with so much cultural and character-driven backstory coming before it, the novel may not be the ideal entry point for new fans. It’s well worth starting with the series’ first installment and moving forward from there.