The wait is over for all you Vince Flynn fans out there!

For months, Mitch Rapp has been steadily working his way through a list of men, bullet by bullet. With each kill, the tangled network of monsters responsible for the slaughter of 270 civilians becomes increasingly clear. He is given his next target: a plump Libyan diplomat who is prone to drink and is currently in Paris without a single bodyguard. 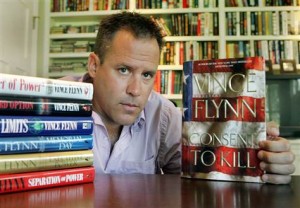 Rapp finds him completely unprotected and asleep in his bed. With confidence in his well-honed skills and conviction of the man’s guilt, he easily sends a bullet into the man’s skull. But in the split second it takes the bullet to leave the silenced pistol, everything changes. The door to the hotel room is kicked open and gunfire erupts all around Rapp. In an instant the hunter has become the hunted. Rapp is left wounded and must flee for his life.

The next morning, the news breaks in Washington that Libya’s Oil Minister has been killed along with three innocent civilians and four unidentified men. The French authorities are certain that the gunman is wounded and on the loose in Paris. As the finger pointing begins, Rapp’s handlers have only one choice—deny any responsibility for the incident and pray that their newest secret weapon stays that way, avoiding capture and dying quietly. One person in the group, however, is not prone to leaving things to chance. Rapp has become a liability, and he absolutely cannot be allowed to be taken alive by the French authorities. But it will soon become clear that nothing is more dangerous than a wounded and cornered Mitch Rapp

The 5 Best Bond Girls of All Time
Catch the Book Trailer for Tom Clancy’s Latest Thriller, Dead or Alive