The Bottom Line: An emotionally raw, first-person psychological thriller about a young reporter who internalizes the tragedies he reports. 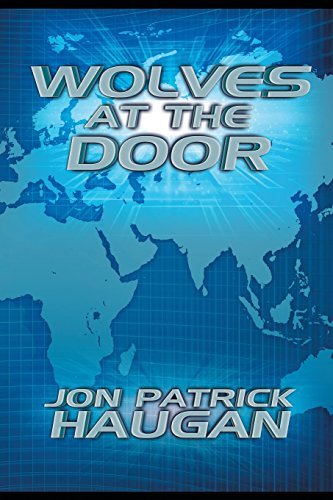 Reporter Peter Downs appears to have it all. He’s young, married, fit and fiercely intelligent, with a glamorous job as a TV news anchor. All is not as it seems, however, as Downs is a self-described “highly depressive paranoid with nothing to lose and nothing to gain.” Wolves at the Door, which is told in the first-person, features a stream-of-consciousness narrative detailing the inner workings of Downs’ struggle for happiness. All the while, Downs shows up to work day and in day out to report a seemingly never ending stream of news that alternates between the banal and the tragic.

Meanwhile, a serial murderer dubbed the Happy Meal Killer (his calling card is a McDonald’s Happy Meal box) is on the loose. Judging by the book’s touching prologue, author Jon Patrick Haugan’s primary objective is to raise awareness about suicide. Mission accomplished there, as the book establishes a dark and increasingly intense tone that provides unmitigated insight into the inner dialogue of a highly successful person secretly struggling to make it through each and every moment of the day.

The book is in fact at its best when Downs’ story and that of the Happy Meal Killer begin to dovetail. While the tension between Downs’ public and private persona is startlingly authentic, some readers may find Downs’ stated age challenging. The protagonist’s level of world-weariness and vitriol seems in direct opposition to someone passionate enough to become a network anchor at just 25-years-old. Also, Downs’ otherwise thrilling internal diatribes build considerable momentum, only to be bogged down by extensive historical footnotes that appear immediately after some of the book’s most successful chapters. Thematically, Wolves at the Door pays homage to Sydney Lumet’s classic 1976 film Network, in which a network anchor struggles with depression after receiving news that he’ll be let go. Haugan even riffs off the film’s most famous line, “I’m mad as hell, and I’m not going to take it anymore” (which becomes “I’m pissed off, and I’m not going to take it anymore”). But unlike Network, a powerful Black Comedy that is simultaneously disturbing, funny and empowering, Wolves at the Door refuses to let so much as a single ray of sunshine in.

Interference, a Mystery by Amélie Antoine
A Selfless Man, a Cinematic Page-Turner by Shawn Raymond Poalillo