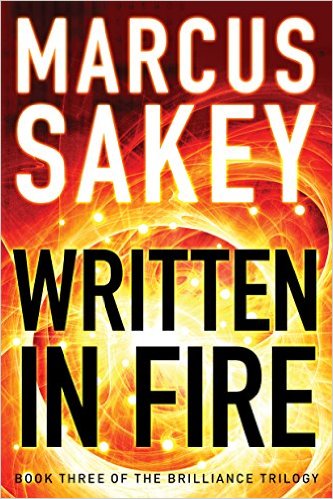 For thirty years humanity struggled to cope with the brilliants, the one percent of people born with remarkable gifts. For thirty years it tried to avoid a devastating civil war, and failed.

The White House is a smoking ruin. Madison Square Garden is an internment camp. In Wyoming, an armed militia of thousands marches toward a final, apocalyptic battle.

Nick Cooper has spent his life fighting for his children and his country.

Now, as the world staggers on the edge of ruin, he must risk everything he loves to face his oldest enemy—a brilliant terrorist so driven by his ideals that he will sacrifice humanity’s future to achieve them.

The third book in the Brilliance trilogy showcases Sakey’s gift for his craft like no other, most notably during an epic siege of the holdfast in which every man, woman and child is somehow engaged in a battle for civilization. First-time Sakey fans, take note that this story arc is entirely sequential, so reading the first two installments is 100% required before tackling Written in Fire (Here’s our review of Sakey’s prior books.)

Everyone Brave is Forgiven, a Historical Suspense Novel by Chris Cleave
The Accidental Vigilante, a Crime Novel by Robert Sterling Hecker