The Bottom Line: One of the decade’s most original and surreal psychological thrillers, Lacey has crafted an impossible-to-put-down murder tale while skewering corporate dysfunction and deftly exploring a rare twin psychopathy.

Rick Lacey’s new thriller opens in 1994 – the same day as the O.J. Simpson murders – as BP employee John McCall discovers his boss’ body in his office. McCall calls Cleveland homicide detective James Johnson, with whom he is well acquainted – Johnson investigated the murder of McCall’s wife and friend two years earlier. With the cold composure of a survivor who has seen more than his share of tragedy, McCall offers a theory for his boss’ death: the beginning of a murderous campaign designed to stop a massive corporate downsizing. 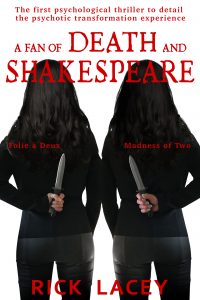 Meanwhile, in London, we’re introduced to twin sisters Beatrice Enola Winter and Beatrice Gay Winter at Heathrow Airport, where Beatrice is boarding a Concorde at the behest of BP. As she observes her fellow passengers, it’s clear that she has the mind of a predator.

As the ensuing chapters unfold, the relationship between the Winter twins is beyond fascinating.

On one hand, Lacey – who was actually downsized from BP in real life – offers a supremely detailed dive into the co-dependency, sexuality and psychological intimacy of twin culture.

But once you realize what the twins are up to, the relationship becomes the driving force in the investigation at the heart of the book. Characters this well-crafted make for a novel that is impossible to put down. Bravo.

A word of warning: readers are strongly advised to skip both the introduction and the preface, which contains critical spoilers.