The Bottom Line: Murder mystery meets quantum fiction in this addictive, cinematic novel from the author of The Newton Code. Honored in the Best Thriller Book Awards as the Best Sci-Fi Thriller of 2021. 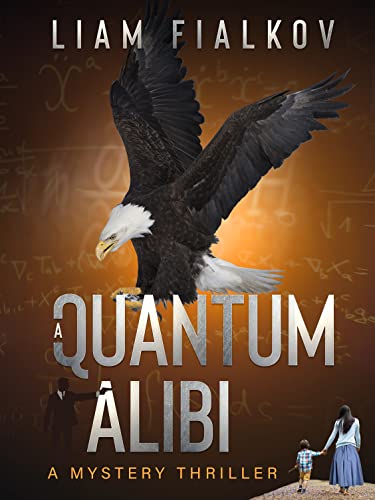 Liam Fialkov’s latest novel opens with a lecture at Columbia University by Professor Patrick Eldrige, an authority on quantum physics. Eldridge makes a bold claim: after the lecture, he will travel to another reality and be in two places at the same time. In the ensuing hours, the professor is reportedly seen in numerous places with his girlfriend, a well-known anchorwoman.

The next day, Eldrige is arrested for the murder of his academic rival, Professor Singleton, who heads the physics department at Stanford. In the ensuing trial, the prosecution reveals a stunning piece of evidence; surveillance video of Eldridge at Singleton’s front door in California, speaking with the victim’s wife near the time of the murder.

In the tradition of quantum fiction classics like Greg Egan’s Permutation City and Michael Crichton’s Timeline, Fialkov has created an exciting new entry to the canon that will broadly appeal to fans of murder mysteries, science fiction and legal thrillers. Fialkov’s narrative is largely told in cinematic chapters that move from setting to setting, concisely conveying essential plot points without getting bogged down into heavy scientific detail.

While the book showcases ample courtroom drama, the story belongs to neither side’s attorneys. Instead, it belongs to Michael, a 35-year-old journalism teacher, who readers of Fialkov’s excellent The Newton Code will remember fondly. Michael once dreamed of becoming an investigative journalist and occasionally takes on ala carte missions. At the behest of an older mentor, Michael sets out on a quest to solve the case, traveling to a Hopi settlement in Oregon called The Fourth Mesa in search of additional answers. Along the way, the novel develops a subplot around a character’s coming of age that is surprisingly poignant.

Meanwhile, Fialkov builds tension with the introduction of additional murders that call the nature of physics and reality itself into question. A Quantum Alibi delivers a torrent of surprises as the twisty narrative ventures into unexpected territory. But thanks to Fialkov’s uncommon gift for plot and just enough information about quantum theory, readers won’t require a leap of faith to enjoy the stunning conclusion.