The Bottom Line: An extraordinary terrorism thriller that feels both timeless and urgent. 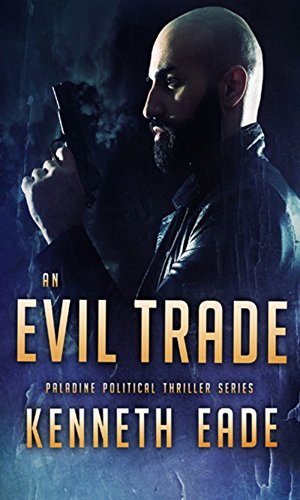 As the fifth book in Kenneth Eade’s Paladine series opens, we find Assassin Robert Garcia at the Syrian border with Turkey. Having completed his mission to rescue Ayisha Cullen, an assassin who had infiltrated an ISIS refugee smuggling ring, he’s on his way back to his sailboat on the Aegean sea.

But Robert and Ayisha experience something will forever be etched in their minds: a mass grave of young girls. The victims, aged 15 to 17, had their organs harvested before they were murdered. Robert heads back to his boat, trying to convince himself that it’s none of his business. Similarly, Ayisha heads back to San Francisco.

Eventually, neither will be able to refuse the call to destroy ISIS’ organ trafficking trade. Along the way, Eade has plenty of surprises in store, and their quest will take their respective journeys to New York, Athens, Istanbul and elsewhere.

But a twist in the plot of this story presents Robert with a despicable choice that his very life depends upon. Five books removed from Eade’s excellent series debut, An Evil Trade feels just as urgent as the original. This is largely due to the subject matter, which is derived from actual ISIS atrocities. What’s more, Robert is a robust character who is essentially nationless due to the complexities of his trade. While his allies and enemies alike span the globe, the lack of official affiliation with a government entity makes his plight feel especially precarious.

For newcomers to the series, Eade provides just enough backstory to make An Evil Trade a viable entry point. He also uses his platform to illustrate the dangers of competing oligarchs and the manipulation of society and politics to serve their whims from both a national security and societal perspective. The result is a potent narrative that is as informative as it is entertaining.