The Bottom Line: A fascinating and thought-provoking medical thriller about the ethical dilemmas posed by genetic manipulation. 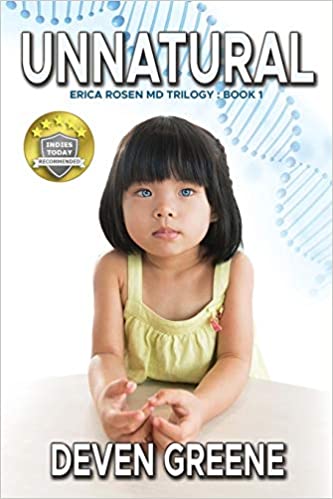 Dr. Erica Rosen has decided to quit her job at the UC San Francisco pediatric clinic, but her passion for helping people is undimmed. When she spots a Chinese girl with blue eyes, she immediately suspects that the father is Scandinavian. The mother insists that the father is Chinese, but has no medical records because the family is in the United States illegally.

Adding to the intrigue, the mother tells her that according to a genetic test done before birth, the child was a boy. Now, the child is clearly a girl. After additional inquiries and an expensive test, Rosen learns that the child was part of a program to develop olympic athletes by manipulating the genes in embryonic stem cells.

Soon, Rosen contemplates heading to China to collect evidence that will destroy the country’s gene-editing program. Has the struggling pediatrician finally found her life’s passion? More importantly, can she single handedly topple a technologically advanced program in the world’s largest country?

Author Deven Greene builds a fascinating case around one of the most important questions facing humanity. Genetic manipulation has the potential to wipe out birth defects, hereditary disease and improve quality of life. But as Dr. Greene’s heroine points out, there are no protocols for doing it safely, and mistakes will be passed on to the next generation.

As a character, Rosen is undoubtedly clever and brave. She’s also uncommonly jaded, and with good reason. Her father, a former FBI agent, died of an E. coli infection. Her brother, who was deaf as well as born with cerebral palsy, was killed after being struck by a car. Her mother, who she’s not close to, constantly reminds her that she’s getting older with no prospects for marriage or children. She has student loans. She works in a clinic where she’s vomited on routinely, where she hates the organization’s system for digitizing medical records. To top it all off, she’s been dating her boss, who’s a jerk.

On the bright side, her roommate, Daisy, happens to be a Chinese-American who is planning a trip to China. Sympathetic readers will relish the chance to ride along as Rosen embarks on an adventure that could not only save a generation of children, but also transform her own life.