By BestThrillers Staff on April 18, 2021 in New Book Releases

Readers across the planet devoured the #1 bestseller The Woman in the Window, and a film version is coming soon to Netflix starring Amy Adams, Julianne Moore, and Gary Oldman.

We called the book “Rear Window meets Gone Girl.” But just because a book is derivative of a masterwork doesn’t mean it isn’t good.

In this case, A.J. Finn’s breakthrough psychological thriller is in rarefied air, and will now take its turn as a literary reference point for future books.

If you loved The Woman in the Window, you may also love these great psychological thrillers.

Watching You by Lisa Jewell 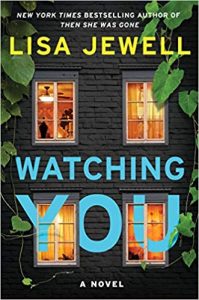 What’s creepier than a peeping Tom? How about an obsessive, socially dysfunctional teenager who spends all his free time watching and cataloguing the movements of his neighbors? He even has nicknames for them, like “red boots.” Oh, did I mention that his biggest dream is to become a spy?

As the headmaster credited with turning around the local school, Tom Fitzwilliam is beloved by one and all—including Joey Mullen, his new neighbor, who quickly develops an intense infatuation with this thoroughly charming yet unavailable man. Joey thinks her crush is a secret, but Tom’s teenaged son Freddie (the one who is always watching) is all too aware.

One of Tom’s students, Jenna Tripp, also lives on the same street, and she’s not convinced her teacher is as squeaky clean as he seems. For one thing, he has taken a particular liking to her best friend and fellow classmate, and Jenna’s mother—whose mental health has admittedly been deteriorating in recent years—is convinced that Mr. Fitzwilliam is stalking her.

What could go wrong?

Lisa Jewell has created a complete ecosystem made up of just the right people, with the right urges, and the right weaknesses for a delectable mystery. Impeccably paced, Watching You is not to be missed.

The Watching  by Michael Donovan

Chock full of psychological suspense, and gloriously infused with dread throughout, The Watching is a must for legal thriller fans. 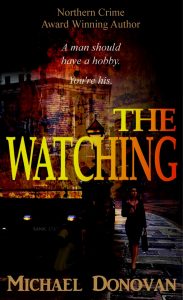 London criminal defense attorney Kate Walker has plenty of reasons to be paranoid. Her clientele is packed with repeat offenders who, despite Kate’s astonishingly good track record, are rarely grateful for her efforts. In some cases, they are openly menacing.

As Walker’s roster of “crazy clients” grows, she muses that her office might need a security door. But it’s soon clear that home security is the problem. Late night calls, an inexplicably broken light bulb, a thermostat set out of her normal range, a bed that looks like someone has been in it.

Does she have a stalker, or is she simply imagining it all?

Author Michael Donovan’s The Watching is more than just a legal thriller. While Donovan includes just enough legal maneuvering and strategy to please hardcore legal thriller fans, he has created an effective psychological suspense narrative that consistently ratchets up tension until the book’s ultimate climax. During each stroll through her Maida Vale neighborhood and even a trip to the train station, readers will find themselves examining each potential suspect. Even Walker isn’t always sure what is real or imagined. When a client tells her he wants a not-guilty verdict and says, “If this goes south it’s on you,” she asks him whether the statement was intended as a threat.

In Donovan’s capable hands, even a trip to the grocery store is chilling (“The carton was swapped in her shopping trolley. She drops it into her bin and works frantically through the rest of her shopping and is entirely unsurprised to find another substitution. Three tins of evaporated milk have miraculously changed to the sugar-filled condensed crap”). In the hands of a narrator who may or may not be reliable, The Watching is utterly packed with clues and red herrings. For many thriller fans, one read may not be enough. Highly recommended.

The Wife Between Us by Greer Hendricks and Sarah Pekkenen 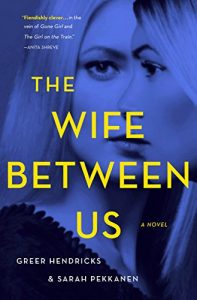 From the start, The Wife Between Us is a grand setup, a literary house of mirrors intended to invite expectations and then destroy them one by one.

So yes, it’s contrived. But is it good? You betcha.

This fast-paced story about a love triangle gone really wrong is driven by the insanely jealous nature in most of us, especially our exes, and especially when marriage is involved.

To say much more would spoil the book’s many surprises, but given credentials of the book’s authors, the thrills should come as no surprise.

I am Watching You by Teresa Driscoll

A swelling crescendo of a novel that starts with a spark and gets more engrossing with each succeeding chapter. 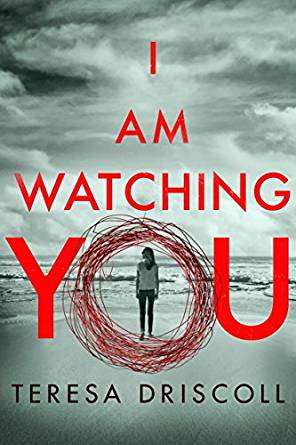 Perfectly read by Elizabeth Knowelden, Teresa Driscoll’s potboiler I am Watching You begins as train commuter Ella Longfield overhears two attractive young men flirting with teenage girls. She thinks nothing of it—until she realises they are fresh out of prison, and her maternal instinct is put on high alert. But just as she’s decided to call for help, something stops her. The next day, she wakes up to the news that one of the girls—beautiful, green-eyed Anna Ballard—has disappeared.

A year later, Anna is still missing. Ella is wracked with guilt over what she failed to do, and she’s not the only one who can’t forget. Someone is sending her threatening letters—letters that make her fear for her life.

Then an anniversary appeal reveals that Anna’s friends and family might have something to hide. Anna’s best friend, Sarah, hasn’t been telling the whole truth about what really happened that night—and her parents have been keeping secrets of their own.

Someone knows where Anna is—and they’re not telling. But they are watching Ella. And you will be too, right until the shocking end.

The Girl Next Door by Lisa Aurello

One of the year’s best thrillers, The Girl Next Door had me at “donuts and high heels.” This cheeky, stylish and sophisticated novel is a must for anyone who loves unreliable narrators. 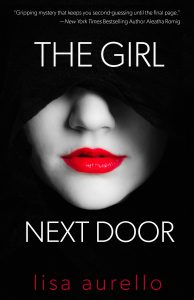 Lisa Aurello’s The Girl Next Door begins with a murder, then rewinds a few weeks to eavesdrop on a conspiratorial café conversation between her likely killers. But in a clever move that expertly ratchets up tension, Aurello is careful not to reveal their identities. Like eyewitnesses that saw something terrifying in peripheral vision, readers will explore each succeeding chapter with a sleuth-like attention to detail, attempting to connect the dots in this most intriguing of cases.

Enter suspect number one, 25-year-old Jane Jensen, who suffers significant amnesia after a car accident. In many ways, The Girl Next Door details her struggle to reclaim her identity. Who is she, really? Why does she bear no resemblance to the heavyset teen of her youth?

But Jane isn’t the only one asking tough questions. When investigators learn that Jane stalked the murdered woman’s husband, they come looking for answers.

With Jane unsure about her guilt or innocence, it’s up to readers to figure it out before the shocking ending.