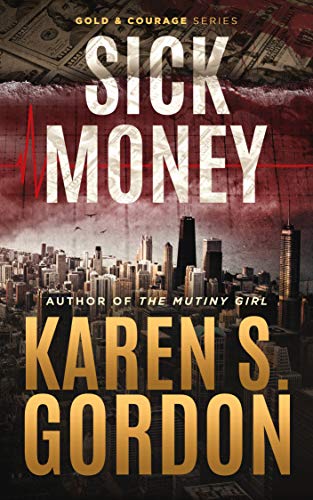 Looking for a way to launder offshore money salvaged from a drug cartel shipwreck, ex-detective and lawyer Vance Courage, and his partner Lauren Gold invest $5 million into HIPP Corp. The company is a medical records firm teetering on the edge of bankruptcy, but the situation is about to get much nastier.

HIPP Corp’s CEO calls an emergency meeting to say that one of their oncology clients had recently lost two patients, and a resulting lawsuit could spell disaster. Courage is forced to step in. Determined to get to the bottom of the issue, he decides to take an emergency investigative trip to Indianapolis. The timing is terrible, as partner Lauren Gold is already waiting for him by the glistening waters of the small Belize island of Ambergris Caye. The duo join forces as more patients die. Is a bad batch of chemo drugs to blame, or is there something more nefarious going on?

Fresh off solving a fascinating mystery in West Texas, author Karen S. Gordon boldly takes her series into the terrifying world of cancer treatment. One of the series’ most unique characteristics is that Courage and Gold are themselves highly opportunistic white collar criminals, but also relish their role as amateur sleuths who take down hardcore offenders. Their unique worldview works especially well in Sick Money, which is brimming with potential suspects and vulnerable patients.

Medical oncologist Dr. Emery, who dispenses FDA-approved poisons and experimental drugs to fight cancer, shows early on that she and her husband aren’t averse to violating medical privacy laws, nor are they shy about using untested software.

Meanwhile Dr. Garcia, soon after losing a patient, accuses other facilities of “patient dumping” – getting hospitals to get poor patients to agree to go to other clinics. Given how many patients are under their mutual care, the stakes in Sick Money are particularly high.

Gordon has built up a steady and devoted readership since her first release, The Mutiny Girl, and series fans will be delighted with this installment. For series newcomers, Sick Money is a prime entry point.