Brad Thor, the author of 19 novels, is a rapidly rising figure in both literature and politics. Since publishing his first novel in 2002, Thor has steadily built a massive fan base with his series built around Scot Harvath, a secret service agent, ex-navy seal, and blunt instrument.

Thor has appeared as a pundit on numerous TV shows, including Hannity, Piers Morgan, Glenn Beck and Lou Dobbs Tonight. The author ranks #26 on Richtopia’s list of 200 “Most Influential Authors in the World.” His books have been purchased for a possible movie franchise by Warner Bros, and he is increasingly vocal about his politics.

A staunch Republican and conservative, Thor is highly critical of the Trump Administration. He announced in a 2018 Washington Times article that he would enter the presidential race in 2020.

Unless you’re planning on reading Thor’s entire catalog front-to-back, it may be helpful to get started with his most popular and best novels. Here is the very best of Brad Thor.

#1: The Lions of Lucerne

After nearly 20 novels, Brad Thor’s sensational debut is still hard to beat, and remains among the best examples of post-9/11 military fiction. 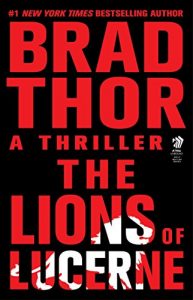 On the snow-covered slopes of Utah, the unthinkable has just become a nightmarish reality: thirty Secret Service agents have been viciously executed and the vacationing president of the United States is kidnapped by one of the most lethal terrorist organizations in the Middle East – the dreaded Fatah.

But Scot Harvath doesn’t believe the Fatah is responsible for the attack. Driven by his professional code of duty and honor — and a solemn vow to avenge his fallen comrades – Scot creates his own rules to get some answers. But his search for the truth raises the blood pressure of his superiors…and casts his own life in mortal jeopardy. The deadly machinations have been set in motion by a shadowy coalition, comprising some of the highest-ranking officials in government and business.

Now framed for murder and on the run, Scot goes for broke and takes his own brand of justice to the unlikeliest place of all –the towering mountains of Switzerland. It is there that he finds an improbable ally in the beautiful Claudia Mueller of the Swiss Federal Attorney’s Office. Together they must brave the subzero temperatures and sheer heights of treacherous Mount Pilatus – and enter the den of the most notorious team of professional killers the world has ever known.

Thor’s 18th Scot Harvath book is one of his best, with Harvath moving into new territory that makes this an excellent starting point for new Thor fans. 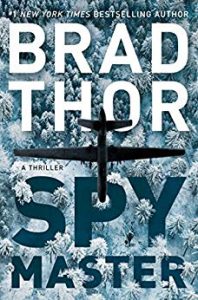 A rumor, a remote cabin in Norway, and an American intelligence operative charged with stopping the next world war before it begins – Scot Harvath’s mission is one of the deadliest he has ever undertaken.

Across Europe, a secret organization has begun attacking diplomats. Reminiscent of the Red Brigades and the Red Army Faction of the 1970’s, these faceless terrorists appear to have the same goals. But in the shadow realm of international espionage, looks are always deceptive.

As a prelude to war, one of the world’s most dangerous intelligence agencies has been charged with preparing the battlefield. Their job – to demoralize the enemy and win the conflict before it even begins. To do so, they will sow as much chaos, dissent and destruction as possible. There’s only one obstacle standing in their way.

Dispatched to Europe, Scot Harvath and his team have been tasked with a critical assignment – to do whatever it takes to keep America and her NATO allies from being dragged into war.

But with his mentor out of the game, Harvath must play an additional role; one which he has spent his entire career avoiding, and one which he believes he is ill-prepared to take on. In his most important operation ever, will he be able to thread this perilous needle? Or, will it end up being the downfall of America and the West?

Thor’s 16th Scott Harvath book was published after Osama Bin Laden’s death, marking a major shift from post-9/11 fiction to a new threat posed by ISIS. The book follows the intrepid operative as he is called upon to stop an ISIS-led plot to destroy the Vatican. 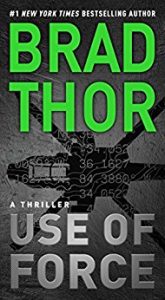 As a storm rages across the Mediterranean Sea, a terrifying distress call is made to the Italian Coast Guard. Days later, a body washes ashore. Identified as a missing high-value terrorism suspect, his name sends panic through the Central Intelligence Agency.

Where was he headed?

What was he planning?

In a race against time, the CIA taps an unorthodox source to get answers: Navy SEAL turned covert counterterrorism operative, Scot Harvath.

Hired on a black contract, Harvath will provide the deniability the United States needs, while he breaks every rule along the way.

In the years after 9/11, scores of political thrillers fantasized about what would happen if  Islamic extremists carried out another major attack on American soil. Perhaps no book made more of this fear than Thor’s fifth Harvath thriller, Takedown. 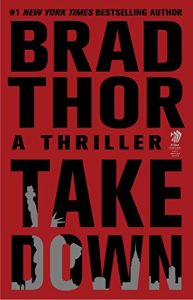 After years without a terrorist attack on American soil, one group has picked the 4th of July weekend to pull out all the stops.

In a perfectly executed attack, all of the bridges and tunnels leading into and out of Manhattan are destroyed just as thousands of commuters begin their holiday exodus. With domestic efforts focused on search and rescue, a deadly team of highly trained foreign soldiers methodically makes its way through the city with the singular objective of locating one of their own — a man so powerful that America will do anything to keep him hidden.

Scot Harvath is now the country’s only hope.

Fighting his way through the burning streets of Manhattan, he must mount his own operation to locate a man the United States government refuses to admit even exists

Given Hollywood’s passion for making movies about the movie industry, this one earns our vote for the most likely to be made into a massive blockbuster. 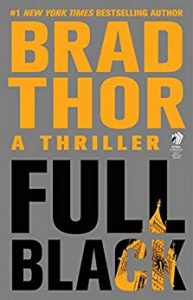 “FULL BLACK” is a term used to describe the most sensitive – most deadly and secretive of black operations. In Thor’s brilliant 2011 novel, Thor describes what happens when one such mission goes horribly wrong, triggering a wave of terrorist attacks intended to fully collapse the United States.

With the CIA’s intelligence abilities hobbled, Harvath launches an audacious plan to infiltrate the terrorists’ network.

Simultaneously, a foreign wet work team has been sent to California. Their target: one of Hollywood’s most famous filmmakers.

While working on a secret documentary project, movie producer Larry Salomon unknowingly exposed one of the world’s wealthiest and most politically connected powerbrokers, a man with a radical anti-American agenda poised to plunge the nation into deadly, irreversible chaos.

Thor’s ninth book was a fictional reflection of a marked change in the way the United States fought terrorism in the decade after 9/11. Both covert ground missions and the highly controversial drone program were highly proactive enterprises, with few rules and no regrets. 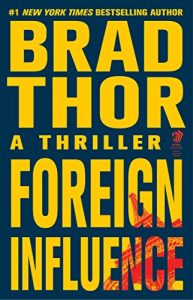 In Foreign Influence, buried within the black ops budgets of the Department of Defense, a newly created spy agency reports only to a secret panel of military insiders. Its job is to target America’s enemies—both foreign and domestic—under a charter of three simple words: Find, Fix, and Finish.

When a bombing in Rome kills a group of American college students, the evidence points to a dangerous colleague from Harvath’s past. Tasked with leveraging this relationship to lure the man out of hiding, Harvath must destroy him. But what if it is the wrong man?

In Chicago, a young woman is struck by a taxi in a hit-and-run, and the family’s attorney uncovers a shocking connection to the Rome bombing.

Harvath must link together the disparate violence and race to prevent one of the most audacious and unthinkable acts of war in the history of mankind.

The cliffhanger ending in Brad Thor’s previous Scot Horvath entry, Spymaster, made Backlash one of the year’s most hotly anticipated books. The new novel, Thor’s 19th in the series, picks up where Spymaster leaves off. 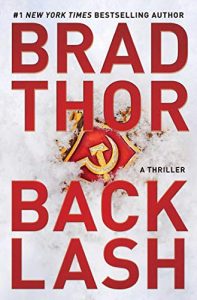 The book opens with a revelation of tragedy, as Harvath’s love interest and others are murdered in a supposed safe haven. More interestingly, the killings were carried out at the behest of the Russian president. Will Brad Thor be able to prove it? Or will he simply enact personal vengeance?

To carry out either act, he’ll have to escape. Harvath has been captured and taken to Russia. Now, far from home and surrounded by his enemy, Scot Harvath must battle his way out. With no support, no cavalry coming, and no one even aware of where he is, it will take everything he has ever learned to survive.

Thor fans will absolutely love Backlash for the book’s sheer inventiveness. Harvath’s complete lack of resources and allies in the book’s opening chapters read like a snowy, extreme version of Survivor.

The Audiobook edition is read by Armand Schultz, providing some narrative consistency with the last few series entries.

Newcomers will be lost, so at the minimum, tackle #18 prior to reading Backlash. Not sure you’re ready to commit to the entire series? Check out our handy ranking of the best Brad Thor thrillers!