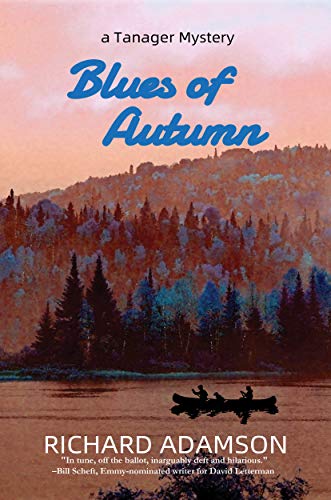 Set in the mountains of upstate New York, Blues of Autumn is the story of Police Chief Norris Tanager, who moved to tiny Glen Echo to avoid the headaches of big city crime fighting. When not moonlighting as a bar band bass player, he keeps busy curbing jay-walkers, graffiti taggers and skateboarders. Ironically, his world is turned upside down during a gig at a local bar.

Is this tragedy a terror attack that resulted in a suicide? Or is it a murder/suicide carried out by Reesor himself? Or could this actually be an elaborately staged double-homicide by unknown perpetrators?

Meanwhile, tourist Paul Briar happens to be in town on the night of the tragedy. The last time Briar visited Glen Echo, his wife had gone missing, and was presumed to have drowned. Why would he show up now, only to start a bar fight at nearly the same time as the bomb blast? Is there a connection between his wife’s death and the Reesor tragedy?

While author Richard Adamson succeeds with several laugh-out-loud moments, credit him for also crafting a worthy whodunnit. The plot intrigues from the get-go, with a number of likely suspects in play.

In Chief Tanager, Adamson has created a likable and vulnerable hero. Complete with his dog-chewed hat, there’s little doubt that Tanager is absolutely the wrong person to manage the crisis. Adamson hilariously and brilliantly ratchets up the tension through a series of events that make it clear that neither the Sheriff’s department, the FBI, nor the “big city” law enforcement officials from Buffalo will be the ones to crack the case.

The weight of the investigation falls ultimately to Tanager, and Adamson treats us to a police ride-along that readers won’t soon forget.