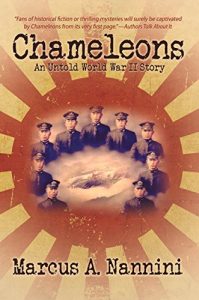 In a small town on the Hawaiian island of Oahu, a pool construction crew unearths a mysterious skeleton. Hours later on the Pearl Harbor Naval Base, Lieutenant Karen Yamura inspects the items found with the body: a rusted Japanese imperial navy officer’s pistol, and a black box containing two watches, a compass, and an impeccably preserved ship’s log bearing the identification number I-16.

During World War II, Japan built 50 tiny submersibles, known as midget submarines, each with a crew of just two men. Considering them a potent “secret weapon,” Five were used in the devastating attack on Pearl Harbor in December 1941, and one may have been responsible for the lethal torpedo attack on the U.S.S. Oklahoma. This rare naval craft is the focus of Marcus A. Nannini’s fascinating Chameleons: An Untold War Story.

Yamura and colleague Lieutenant Commander Christopher Pastwa examine the newly discovered artifacts – plus a sword unearthed by the quirky property owner – and begin an investigation into the identity of the dead Japanese sailor. But soon, they realize that a larger inquiry may be required. Midget submarines carry a crew of two, and they can find no record of the second man. What are the chances he survived?

No matter how predictable Chameleons may seem in its early chapters, the book is guaranteed to surprise in the final third, and the saga of the midget sub crewmen is nothing short of astonishing. As a bonus, author Marcus A. Nannini has packed the novel with details that are guaranteed to delight history buffs, including photographs, newspaper clippings and more.

At times, dialogue between characters feels oddly formal, while Nannini’s commitment to capturing native dialogue goes the opposite direction (“Boss says we can’t work till da cops get dat body outta dere. Can’t argue with da boss! So we goin’ fishin’.”) Nevertheless, reachers should push on, because the payoff at the end is truly historic.