Bottom Line: Highly recommended. Red Stick Two is an absolute godsend for military thriller fans, in which life and death is determined by skill, not technology. 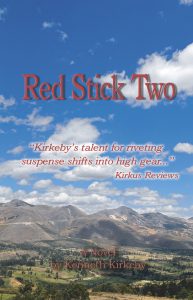 When an American engineer is abducted by communist group The Shining Path, American intelligence taps two of its best to head into the Peruvian highlands: agent Richard Creole, a regional expert, and master tracker Virgil Cleary. Set in the 1980s, author Kenneth Kirkeby transports us to a time and place where email, cell phones, text messages and other modern amenities are nonexistent. Mission success is wholly dependent on the skills and chemistry of its two main characters.

Having been retired for 15 years, the Agency has one hope in convincing Vietnam veteran Cleary to join the mission: cattle futures. Life on Cleary’s Wyoming cattle ranch has been happy, but difficult. Accordingly, the book opens with a sensational description of a mountain lion attacking a young calf in the snow, defending its kill, and dragging the meat toward its lair. While financial pressure entices Cleary to join the mission, it’s soon evident that tracking is in the half-Creek Indian’s blood.

Red Stick Two, which happens to be the code name for Cleary’s assignment, does away with techy espionage, cross-continental missiles and larger-than-life movie-inspired situations. Instead, Cleary and Creole have their boots on the ground, put their tracking skills to the test and get back to basics in their quest to rescue an American engineer abducted by rebels. Without ever slowing the pace, Kirkeby builds incredible anticipation with details that might seem mundane in less capable hands, such as during Cleary’s physical, when the doctor advises Cleary that it’s too late for vaccinations, and he’s at serious risk for altitude sickness. The dynamic duo features two equally strong personalities, which makes for plenty of great back-and-forth, a few marked differences in tactics, and two unique takes on each and every sticky situation in South America.

Kirkeby’s breathtaking landscapes, high-altitude ambience and a few strands of untranslated local dialect for added flavor, creates an incredibly intense guerilla feel that his characters fully inhabit. As the tables get turned and Creole and Cleary are the ones getting hunted, Kenneth’s deep research, familiarity with tracking and balance of tension and suspense shine. Highly recommended.

The President is Missing, a Political Thriller by James Patterson and Bill Clinton
Chameleons, a Fascinating Historical Mystery by Marcus A. Nannini