The Bottom Line: A timely and atmospheric historical thriller that is tailor-made for fans of Steve Berry and Dan Brown. 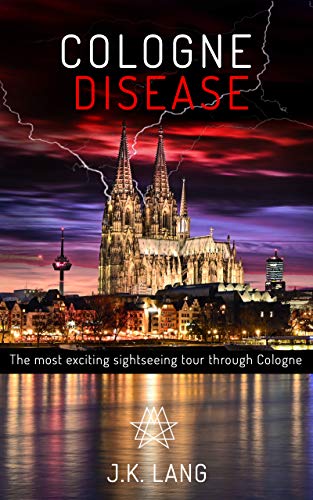 Set in Cologne, Germany, J.K. Lang’s novel begins as the city is celebrating its annual Carnival festival – a perfect breeding ground for plague. Meanwhile at the University of Cologne, dean Magnus Berger is confronted and attacked by a mysterious church official who wants information concerning Magnus’ son, Gereon. Magnus knows that he must not cave, even if keeping the long-hidden secret will cost him his own life.

During another of the book’s timelines, which takes place in the 1520s, brothers Martin and Peter arrive at what was then a village to become students. Unfortunately, their arrival coincides with the burgeoning Lutheran movement, and after Peter speaks of reformation during mass at St. Peter’s Cathedral, he is soon convicted of blasphemy. Soon the brothers are at the center of a terrifying new plague called the English Sweat Fever.

Blending elements of medical suspense and historical fiction, Lang has constructed a sprawling thriller that is thematically reminiscent of Steve Berry’s best work. The power of the church, the neverending battle against plague and the endurance of family loyalty are prevalent themes throughout. In terms of structure, Lang has written an ambitious novel that takes place across multiple points in history, including World War II. While that limits the amount of time readers are able to spend with any particular character, he wisely develops Claire, an American historian and symbologist who eventually becomes the novel’s lifeblood. In particular, a confrontation between Claire and Gereon over a pivotal historical document is a highlight.

Is it frustrating that the book’s primary heroine does not appear until chapter eight? Absolutely. But in doing so, Lang firmly establishes that Cologne itself – with all its mysteries, flaws and power struggles – is the book’s primary focal point. And when it comes to the city and its wonders, Lang’s story-based tour has few equals. In particular the descriptions of the cathedral’s architecture throughout the ages – which become extremely important as the fascinating narrative unfolds – are absolutely tactile and stunning. At times, the book’s plot reveals are jaw-dropping. What is most impressive is how well Lang eventually ties the various storylines, places and people together into a satisfying conclusion.

The Cry of the Lake, an Unforgettable Crime Thriller by Charlie Tyler
The Lumbermill, a Compelling LA Noir Crime Novel by Laya V Smith