The Bottom Line: Devastatingly funny, dark and unputdownable. One of the Year’s Best Thrillers. 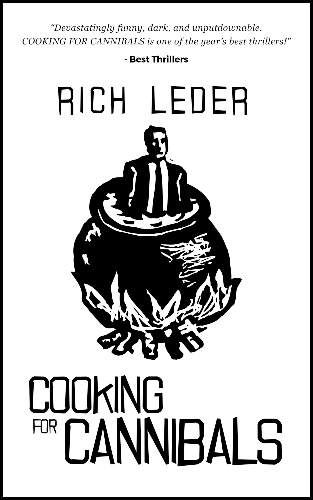 As Cooking for Cannibals opens, 35-year-old gerontologist Carrie Cromer is committing her first crime. Carrie works in a lab that seems to have created nothing less than the fountain of youth. The miraculous drug has reversed aging in her lab rats, seems destined for further testing, and one day, FDA approval. But that will take years, and Carrie’s 86-year-old mother’s health is deteriorating rapidly. She needs the drug now.

Within 16 hours of taking the stolen drug, Joanna looks like a woman in her mid-40s, and she claims to feel better than she actually did at that age. Dining in the restaurant within the low-budget nursing home where she lives, the Copa, she decides to reveal her secret. Soon, all the residents were significantly more youthful.

Meanwhile at the lab, Carrie finds that two people are under suspicion: Carrie, and Stuart Langston, the lab’s creepy biostatistician, whom she had tried to frame for the theft. To Carrie’s horror, her boss isn’t content to let the police solve the crime. His investor has instead hired a murderous fixer named Eduardo Wolf.

Author Rich Leder had us with the book’s premise, but his most brilliant stroke is the drug’s side effect, which is a ravenous craving for meat. Leder, who is the author of the hilarious Workman’s Complication and Swollen Identity, creates perhaps his most hilarious situation yet when the newly empowered Copa residents defend their cook, Johnny, from his corrupt parole officer. Among Leder’s many brilliant linguistic
innovations in the ensuing chapters is “Fabulous Fat-Man Fricassee.”

Shocking without ever veering into the gruesome, Cooking for Cannibals offers the wit of a cozy mystery with absurdist comedy. No matter how low she goes, Carrie is a protagonist every reader will be rooting for.