The Bottom Line: A true original among spy thrillers and a must-read for race fans. 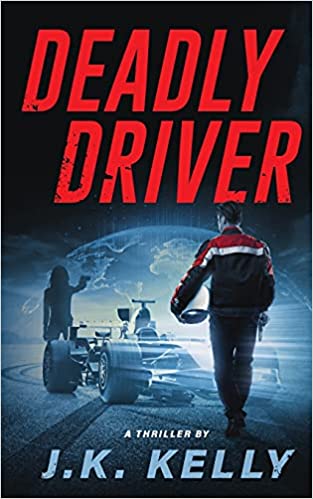 Deadly Driver begins at a party prior to the Russian Grand Prix in Sochi. While mingling among fashion models, celebrity athletes and fans, Russian oligarch Gregori Ivanova is assassinated with a nickel-sized explosive device planted on his cap.

And the identity of the assassin? Formula 1 champ Bryce Winters, who planted the explosive while autographing the man’s cap.

But Bryce is far from a professional killer. Bryce is a modern-day Mario Andretti, one of just two American drivers to have won have won the F1 championship, the Daytona 500 and the Indy 500. But his status as an F1 driver, its championship series providing access to the world’s most influential people in over a dozen countries worldwide, also makes Bryce an ideal tool for the CIA. A deadly spy hiding in plain sight.

The book’s international locales and glamour deliver all the grandeur of an Ian Fleming spy thriller, complete with scenes in Monte Carlo. However, the book’s most satisfying suspense comes from the fact that Bryce is an unwilling pawn in the CIA’s grand plan. Forced into service, Bryce lives each day in dread, knowing there’s a very real possibility he could end up in a foreign prison or morgue. When team owner Max Werner approaches him about extending his contract for another three years, he’s filled with an internal conflict of the highest order. All he can think about are the dirty deeds the CIA will require him to carry out. Readers will be both at rapt attention and divided about whether they want to see Bryce act on CIA missions or break free.

Author J.K. Kelly, a former NASCAR P.R. Director and longtime racing industry veteran, blends racing and spycraft together in vivid color. While Deadly Driver is hardly just for race fans, devotees of Ron Howard’s Rush and Netflix’s Drive to Survive will be in nirvana. In both ambience and plot, Deadly Driver is an original that works on many levels.