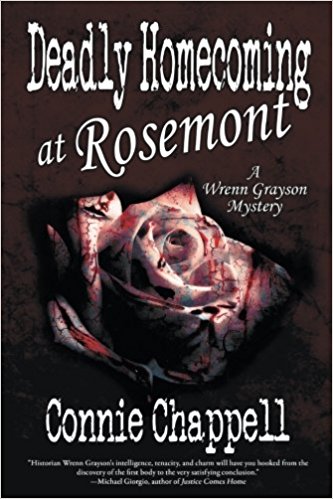 For 29-year-old historian Wrenn Grayson, her new career is more than just a passion. As Grayson puts it, her work consists of “enchantment with echoes calling me to the past—other people’s pasts, their history, for I am not enchanted with my own.” But when it comes to the Rosemont estate in Havens, Ohio, Grayson is only in it for the money. Needing cash, she strikes a deal with new mansion owner Clayton Addison to find out everything she could about the Rosemont family.

Her plan is thwarted when she and Addison arrive at the mansion and find Trey Rosemont murdered. Meanwhile, across town at Eastwood University, Egyptian artifacts are stolen from the history department safe. It so happens that Wrenn has been in a six-year common law relationship with longtime Eastwood department head Gideon Douglas. If the artifacts aren’t recovered, his professorship may be on the line.

While it’s a foregone conclusion that the two seemingly separate crimes are related, Chappell’s expertly created small town atmosphere, in which old friends and suspects are identified at every turn, makes the journey come alive. Less effective is the considerable time devoted to the curious relationship between Wrenn and Gideon. The arrogant older professor has been twice-married, has been known to sign his name GOD, and drives a vintage Karmann Ghia. Exactly what does Wrenn see in him? The relationship itself is essentially a third mystery, and one for which there seem to be no easy answers. Setting that aside, however, Deadly Homecoming at Rosemont is easily entertaining enough to make Chappell’s readers hold out hope for a new series installment.