The Bottom Line: A steamy, seductive police procedural about a cyber predator whose deviant mayhem originates in the dark web. 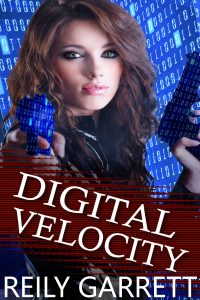 Set in the fictional city of Callouston, Digital Velocity follows a pair of police detectives, Ethan and Larrick, as they follow an anonymous tip that points to a possible serial killer. As the book begins, the detectives enter a murder scene that quickly devolves into an ambush. Ethan barely survives, which causes the tipster – an elite hacker named Lexi – to come forward out of guilt.

With Lexi’s help, Ethan and Larrick wade ever deeper into a world that scarcely resembles their own. The pair track a psychotic murderer whose bloodlust seems to know no bounds. Once the investigation gets rolling, no one is safe.

Make no mistake, this is no cozy mystery. Crime thriller fans comfortable with prevalent use of torture, sex toys, rape, power games and mutilation will be right at home with Digital Velocity.

Alongside the investigation itself, author Reily Garrett layers in a compelling romance and some extremely hot sex, including one passage that may be a contender for sex scene of the decade. But the real hook here is the chemistry between investigative pals Ethan and Larrick. While their foul-mouthed banter is a little over the top – they continue to wise-crack and throw good-natured barbs at each other even when getting shot at – their connection feels organic and earned. Ethan may be the star of this novel, but the buddy cop relationship is the glue. Thumbs up.