The Bottom Line: Although not officially a part of King’s Mr. Mercedes series, there’s enough left of the original trilogy’s magic here for one more good story. King’s marriage of the police procedural and horror genres pays off once again. 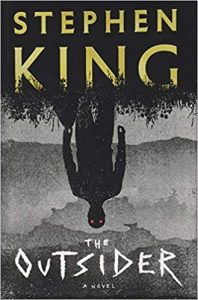 In The Outsider, a small town is rocked when a longtime little league baseball coach is publicly arrested for the rape and murder of a young boy. The crime seems wildly out of character with what the town knows about Terry Maitland. And yet, fingerprints, blood samples, eyewitness testimony and even DNA samples found within semen point to Maitland as the killer.

Meanwhile, video footage, additional eyewitness testimony and firsthand accounts make clear that Maitland was in another city at the time of the murder.

How can this be?

In Stephen King’s world, anything is possible. Enter Holly from Finder’s Keeper’s investigative services, whom fans of King’s magnificent Mr. Mercedes trilogy will remember as the socially awkward, morally admirable and clever sidekick to Detective Bill Hodges. As Holly knows all too well, paranormal activity is real, and it’s up to her to open the minds of these small town investigators.

King’s marriage of the police procedural and horror genres pays off once again. While The Outsider isn’t one of King’s finest novels, the first half is superb and provides more than enough momentum to push most readers through to the end.