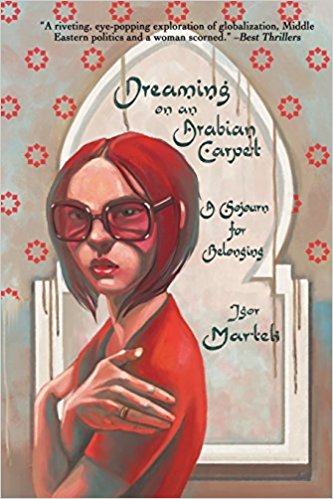 Ricky Garcia Magasaysay may have been born in the Philippines, but he is a global citizen in the true sense of the word. When Igor Martek’s book begins, the hope of a better life has already taken Ricky to Hong Kong, Kuwait, Saudi Arabia and elsewhere. Now, as he begins a lengthy assignment, the former computer repairman oozes frustration as he deals with complicated border crossings, government bureaucracy, personal demons and the knowledge that he’s being followed.

In Ricky, Martek has created a hugely sympathetic character that is easy to root for. Martek spends substantial time exploring Ricky’s emotional affair with fellow immigrant Breeze, a thread that remains constant throughout the book. In general, however, the tension in this book doesn’t come from gunfights, but rather, from the complexities of navigating the modern age. It’s intense, but at times it is also hilarious. This email Ricky receives from an employer highlights the ludicrous – and totally believable – nature of Ricky’s plight: “You are correct to point out that your employment contract is with ‘Technomatics’ alone.

However, the original franchise agreement between Al-Ghannam and ‘Technomatics’ Hong Kong was that the cost of your salary would be shared between the parties equally. As you know, we have been paying our half into your bank account. If the Kuwait side is not honoring their payment obligations to you, we would look into that on your behalf. But bear in mind that Al-Ghannam is no longer the franchisee. As you know, their stake has been transferred to Kuwait Educational. It is not clear what leverage we have left over Al-Ghannam. It is also not clear that Kuwait Educational will take up payment obligations in arrears. I’ll keep you posted.”

Rather than go for cheap thrills, Martek has created a thoughtful, textured novel that transcends genre. Highly recommended for cerebral readers ready to embark on a deeply developed journey.

The Rooster Bar, a Daring New Legal Thriller by John Grisham
The Plan, a High-Octane Political Thriller You Won’t Be Able to Put Down