The Bottom Line: An epic sci-fi tale of revolution, family loyalty and survival. 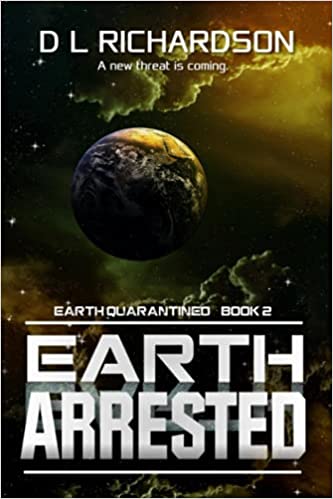 In Earth Arrested, the planet is governed by aliens called the Criterion. A “one child per family” rule has been in effect to control population growth and resources. That’s a life-threatening problem for celebrity Kethryn Miller, who learns that she has a twin sister, Neah, who has been hidden in an underground facility to ensure her survival.

After Kethryn and her mother are arrested for a “conspiracy to overthrow and undermine the Criterion,” Kethryn is disturbed to hear that her ailing mother has been fully cooperating by disclosing details about the illicit Twinborn Protection Program, which could lead to the destruction of her sister and thousands of others like her. Meanwhile Neah and her fellow Indwellers are rapidly preparing for two things: imminent attack from the Criterion, and execution of a plan to reclaim the planet.

At the core of this second book in D.L. Richardson’s trilogy, the story of an oppressed people and their question for social justice, revolution and ultimately survival would work in any genre. Fortunately, her futuristic version of Earth, its inhabitants and the alien race that has overtaken it is fully absorbing. Cloaking technology, the constant threat of radiation poisoning and espionage add to the suspense. Along the way, Richardson includes snippets from historical archives throughout that detail world events that led humanity to its ultimate plight. These range from the familiar – like the Berlin Wall crisis in 1949 – to those of her invention, grounding her tale with facts that make it all the more believable and gripping.

While Richardson adds plenty of backstory to help readers acclimate to the grim, wondrous world she has created, readers are strongly encouraged to read Earth Quarantined before tackling Earth Arrested.