The Bottom Line: A sci-fi thriller that manages to turn conventional ideas about space exploration, global conflict and even freedom itself on their head. Fans of Nick Webb may find a new favorite in D.L. Richardson. 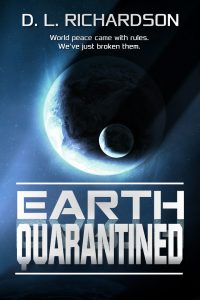 More than 300 years in the future, the freedom of the human race is in jeopardy. Humanity has been saved from a planet-wide plague by a seemingly benevolent alien race called as the Criterion. In exchange for agreeing to live in peace under quarantine, the Criterion agreed to provide technology – long-term stasis and hyper-speed travel – that would enable humanity to colonize distant worlds. But centuries later, this promise has yet to be delivered.

Despite centuries of peace in author D.L. Richardson’s futuristic novel, humanity remains nearly as divided as it is today. Fighting in the outlands has continued for centuries, and humanity in general is growing more impatient. Derek Miller, the ruler of a country called State Seven, believes the Criterion will ultimately deliver what they promised. His daughter Kethryn, however, isn’t so trusting. She wants the Criterion gone. Kethryn, a popular actress, has reluctantly agreed to inherit her father’s role, but succession may not be so straightforward. Her mother just dropped a bombshell that could end her life as she knows it: “Derek Miller is not your biological father.”

While colonization stories are common within the sci-fi genre, few novelists in the genre nail the characterization to the degree that Richardson does in Earth Quarantined. From the book’s opening pages, readers will find themselves deeply invested in the series-worthy fates of Derek, Kethryn and even Aries, a ruling Criterion. More impressive, however, are the sophisticated themes about freedom, colonization and manifest destiny explored in what is a thoroughly enjoyable thriller. Book clubs will need overtime to thoroughly discuss the many obvious parallels to human history, as well as to mull over the biggest question Richardson poses: are humans welcome in the wider galaxy?