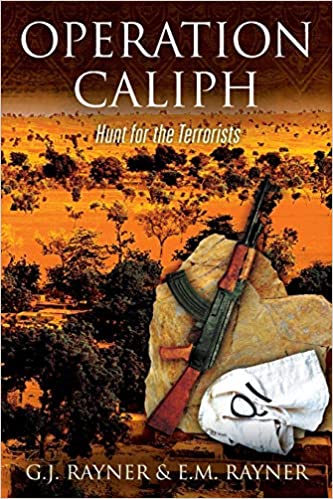 The third book in G.J. Rayner & E.M. Rayner’s 9/11-era-themed series opens during a July 4th celebration in 2002, where a terror attack claims at least 25 lives and wounds over 100. Ibrahim Haddad, and his lover, Inga Doudin were responsible for the assault, and OMICRON, a Christian security contractor and intelligence organization specializing in black ops, is tasked with finding them.

But that won’t be easy. By July 8th, both terrorists were in Cancun, having undergone reconstructive surgery. What’s more, they’ve got plenty of money and a plan that takes them through Cuba to St Martin and other exotic locales. And this is exactly where the story transforms from a solid terrorism thriller to a bonafide page turner.

Ibrahim doesn’t quite fit the mold of the stereotypical 9/11-era jihadist. He orders Johnny Walker Gold on the rocks, high-end champagne and prefers five-star resorts over under-the-radar safe houses. Their plan goes awry as Ibrahim discovers that his financial safety net is in serious peril. A series of cyber-attacks has devastated Al Qaeda’s bank accounts and those of all its top leaders. What’s more, a connected company’s stock has collapsed. Haddad asks a shady attorney named Peter Van Hansza to funnel money from a separate account. Just days later, Peter informs him that he has told “the infidels” about their business together before his next action, which will both shock and surprise readers.

While OMICRON’s global manhunt is well-crafted and gets plenty of attention, chapters told from the terrorists’ point of view are what distinguishes Operation Caliph from other post-9/11 thrillers. Following along with Haddad as they flee through the Caribbean, Mali, Tunisia and elsewhere with OMICRON hot on their trail is nothing short of riveting. While the Rayners don’t go as far as to make Haddad sympathetic, their insights do render him multi-dimensional.

While the Rayners’ growing body of work is recommended, Operation Caliph works well as a stand-alone novel.