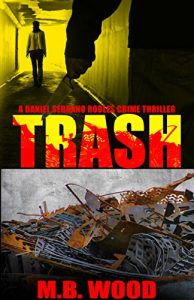 Even before Bay Area recycling company CEO Joe Kilbain puts a bid on a huge contract in Oakland, the win is purportedly assured, thanks in part to the attempted murder of rival Daniel Robles. But Robles, who survived a gunshot wound, won’t be easily discouraged. Neither will Kilbain, who knows the dirty politics of the Oakland waterfront like the back of his hand.

Anyone who has watched the Sopranos understands that trash is a truly dirty business. But in the hands of author M.B. Wood, it’s also deliciously nasty. Like the Sopranos, Trash is set in the late 1990s before social media heightened political scrutiny, depicting a world where local government officials are hardwired for corruption.

Kilbain is a racist, cold-hearted industrialist who fathered a child with his own sister, while bribing a government official to help get his own brother elected mayor. But the story ultimately belongs to series hero Robles, who must navigate unimaginable obstacles to help usher in the harsh light of justice.

Trash works strictly as a crime thriller, it also serves as an intriguing exploration of environmental crime. Crafted in a no-frills style similar to the great James Ellroy, Wood leaves no fat on the bone as he succinctly details a subculture where the cost of doing business may be death. Weighing in at a brisk 52,000 words, Trash is quick enough to enjoy on a long flight. And while this is the second entry in the Daniel Serrano Robles series, Trash is a perfect entry point to Wood’s work.