The Bottom Line: An ambitious psychological thriller that reads like a fever dream. Tailor-made for fans of Franz Kafka. 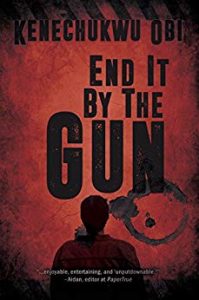 Beck Blades, a writer from rural Nebraska, is obsessed with creating a Hollywood blockbuster. Movie studios reply to his queries with rejection after rejection. His wife, Julie, isn’t exactly supportive of his creative endeavors. She’s cruel, jealous, and, apparent by the way he readies himself for self-defense, capable of violence.

Beck’s transformation into a writer with a studio contract is nothing short of surreal. In part due to the hyperbolic nature of the deal, and the oracle-like reaction of his wife, who warns that it will lead to his downfall, it’s unclear what is real and what is imagined. Nevertheless, he finds himself in a boardroom with a masked woman, complete with a chandelier draped with G-string panties and bras. Then, after a short and somewhat incomprehensible meeting, he is taken captive.

Within a plot that one can safely describe as Kafkaesque, author Kenechukwu Obi grapples with existential ideas about the struggle of artistry – rejection, persistence and the irrational urge to create in the face of repeated failure and personal sacrifice. But when the novel delves headlong into the actual work that got him the studio contract – a terrorism thriller about a bio-attack – it feels like a complete left turn in terms of theme and style. Recommended only for readers that have a high tolerance for experimental fiction.