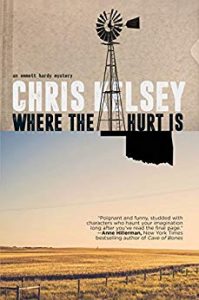 Set in 1965, Where the Hurt Is tells the story of a tough but inexperienced Oklahoma police chief who chooses to investigate a brutal murder that most would rather forget.

Written from the point of view of police chief Emmett Hardy, Chris Kelsey’s novel opens on a horrendously hot Oklahoma night, as the lawman is asked to find a prizewinning pig that has gone missing. But when he instead discovers the contorted body of a young black woman, his life changes forever.

As in all great small town mysteries, tiny Burr, Oklahoma, is a character in and of itself. Burr has zero black residents, a fact attributable to the Burr’s former reputation as a “sundown town,” where blacks were considered unsafe after dark. Kelsey’s choice of setting – every signpost, bar and resident feels authentic – is the source of blistering tension. Rather than the heavy-handed and frankly unrealistic racism depicted in many southern period pieces, most of Kelsey’s characters are sweet as pie, and largely unaware of how their inherent attitudes render any hope of justice highly unlikely.

But the novel’s best asset is Hardy himself. As a local football legend who led his high school team to back-to-back state championships, to say nothing of his combat experience in the Korean War, he commands a high degree of respect. But as Hardy moves forward in his investigation, Kelsey depicts the gradual erosion of those communal relationships brilliantly, using a series of subtle events to create a narrative that is ultimately multi-layered, intense and emotionally resonant. Among a sea of anti-heroes, Hardy is the hero that we all need right now.