The Bottom line: Fast-paced, evocative and urgent from the get-go, Express Intent is the best Gold & Courage series book yet. 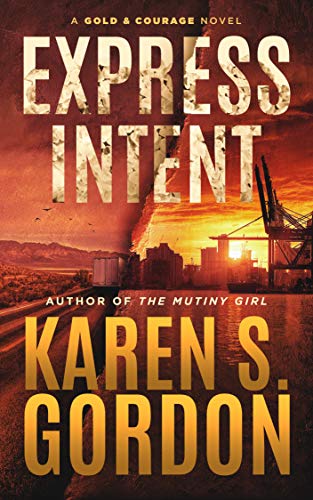 Inexplicable mysteries are afoot in West Texas. Just after midnight, a breach at a military research and development lab leaves a security guard dead, his finger amputated to get past the biometric security pad. The power has been cut, and a multi-million dollar prototype experimental aircraft is nowhere to be seen.

Meanwhile, teenage beauty Caitlin Fleming, daughter of a successful investment banker, leaves a nearby resort for an early morning run and vanishes without a trace. Luckily, ex-cop Vance Courage happens to be staying at the same resort. Vance rushes out to investigate, but he’s baffled. Beneath the same place where he swears he saw a UFO, Caitlin’s trail comes to a sudden stop.

In her third Gold & Courage series thriller, author Karen S. Gordon sets up a fascinating whodunit by front-loading it with intrigue. Prior to Caitlin’s abduction, yacht captain and part-time photographer Davis Frost’s long stares gave the teenager the creeps. She reported it to Vance’s business partner, Lauren Gold, just before she disappeared. At the same time, a group of Israeli intelligence agents arrive at the resort. Judging by the way they’re dressed, they didn’t come to Texas to hunt or fish.

Gordon also expands the Gold & Courage universe with several deliciously intriguing characters, including The Secondmen, a group of volunteers that help ranchers along the US/Mexico border spot cartels and human traffickers. Then there’s Daryl Flood, a Native American tracker with long hair, a body like a gymnast and a horse named Picasso.

While Florida and Louisiana make brief cameos, Gordon’s well-drawn landscapes and visual artistry firmly root the novel in West Texas, so much so that the region feels like a character all its own. Topping it off with a flicker of sexual tension between Vance and Lauren, Express Intent is Gordon’s best book to date.