The Bottom Line: A must-read for any sci-fi thriller fan. 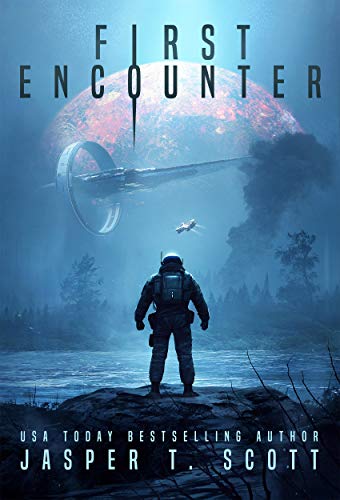 With 20 books to his credit, Jasper T. Scott is already a standard-bearer among the hardcore sci-fi faithful. First Encounter may be the breakthrough book that launches him into the broader public consciousness, much like Andy Weir’s The Martian did several years ago.

In the distant future, the United Nations of Earth sent out the Forerunner ships to explore and colonize the four most promising star systems within 50 light-years of Earth.

Forerunner One left Earth under the command of Captain Clayton Cross, heading for Trappist-1.  After a ninety year journey to reach it, the crew encountered not only a habitable world, but alien life already inhabiting it, and dark secrets lurking beneath the surface.

The revelation of who these aliens are and what they want proves more terrifying than promising, and Captain Cross is forced to make tough decisions that will affect not only his crew, but the fate of the entire human race.

Like all Jasper Scott books, First Encounter features tons of action and mystery while still delivering the kind of intellectual and existential heft that sci-fi fans crave. Here, Scott’s characterization is nearly as well-developed as his plot, which pays major dividends for more casual fans.

Lover Come Back, a Potent Crime Thriller by Tom Preschutti
The Loss of What We Never Had, a Suspenseful Political Thriller by Carloyn Thorman