The Bottom Line: An expertly paced psychological thriller on the high seas. 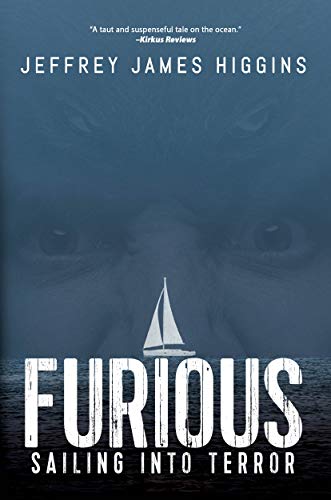 As Furious begins, surgeons Dr. Dagny Steele and her husband, Brad, are grieving the loss of their daughter. Dagny seems to resent how quickly Brad has returned to normalcy, while Brad wants her to move on with her life. He also has a surprise: he’s leased a 62-foot yacht that the two of them will sail from Indonesia to the Maldives. The trip will take them a month, and, he insists, it’ll be therapeutic.

Dagny’s friend, Jessica, is immediately wary. Dagny has been terrified of the water since she was a little girl. Neither have any idea that the voyage will be a nightmare beyond all belief.

Reminiscent of the Charles Williams novel Dead Calm in setup and setting, author Jeffrey James Higgins delivers a modern tale of mayhem and madness on the ocean. Written in the first-person, the immediacy of Dagny’s emotional suffering and paranoia is fully absorbing. The chapters leading up to the trip are filled with uncommon dread. Despite Brad’s efforts to calm her nerves, such as taking her to visit a Hindu temple, all Dagny can see are bad omens.

Once the pair are alone on the water, it’s increasingly clear that their everyday fears, such as pirates and storms, will be the least of their worries. Higgins’ pacing is excellent, and his narrative shows admirable restraint, patiently ratcheting up the suspense to a crescendo of intense psychological terror and mortal danger.

The Moscow Affair, a High-Stakes Murder Mystery by Nancy Boyarsky
The Best Thriller Books of 2021 So Far