The Bottom Line: A must-read whodunnit that is fresh, funny and truly innovative. 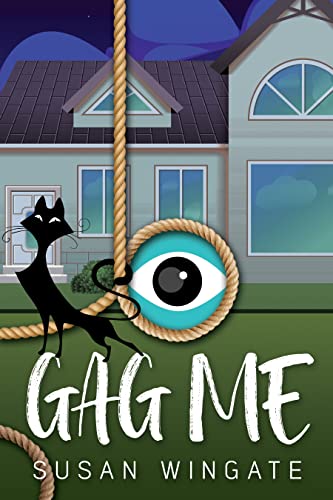 Gag Me transports readers into the fragile psyche of a small-town waitress whose best friend, Winsey, is murdered. She works at a diner in tiny Friday Harbor, Washington, and had the misfortune of being the last person seen with Winsey. As such, she’s called in for questioning, and soon after, taken to the crime scene, where she spots a spoon, a tourniquet and a syringe with its needle still attached.

Susan Wingate’s protagonist spends a lot of time with her 18-pound cat, Lester. She also has plenty she doesn’t like to talk about. For example, Winsey was in love with her. Also, there’s the cocaine and heroin habit she left behind just six months earlier. Finally, there’s the fact that she has Asperger’s Syndrome.

Her private nature isn’t a good look for a murder suspect, and that comes to a head when she finally meets “the gargoyle,” a man who she suspects is following her. But the gargoyle has a name: Connor. An undercover detective, Connor is on loan from another police department for reasons that begin mysteriously. Despite the obvious conflict of interest between lawman and suspect, the two have a certain chemistry that – thanks to Wingate’s flair for creating interpersonal friction that leads to more – feels authentic and earned.

Wingate’s levity cuts through the bleak subject matter in regular doses (In an interrogation room: “Should I drop my pants?” They say in unison, “No.” With more vigor than one might think to). And while there’s little in the way of graphic content, and few F-words to be found, Wingate stretches the limits of the cozy mystery genre in both form and style. Novels written largely entirely in the second person (where the reader is addressed as “you”) often suffer from disorientation, but that isn’t the case here. Wingate’s solution is to address the reader as if they’re in a scavenger hunt or escape room, with short, informational chapters with headings like “Someone You Need to Know.” While these informational dossiers occasionally call attention to form and away from story, Wingate executes it so consistently well that by the halfway point, immersion in this witty, innovative whodunnit is complete.