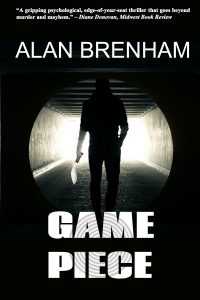 When Texas detective Barry Marshall receives an anonymous tip on a stolen Chevy truck, he knows that something is off. The caller urges him to come quickly, claiming to fear for his own life, and the truck description matches an active case Marshall is working. But when Marshall arrives, there’s no truck in sight – just the butchered bodies of a young Hispanic couple.

Is the murdered man the person who called him? Or has Marshall been led into a trap?

Through alternating points of view, author Alan Brenham deftly reveals a psychopath who is hell-bent on exacting revenge for some past indiscretion (“If only that prick cop treated him with a little respect back in Dayton”). But the perp isn’t content to simply assassinate Marshall from afar as he watches the TV news crews roll into the crime scene. He’s going to have a little fun before making Marshall pay the ultimate price.

Brenham’s fourth novel is every bit as engrossing his Jason Scarsdale series that came before it. If there’s one distinguishing thread that runs through Brenham’s work, it’s humanity, a trait sorely lacking in most cookie-cutter police procedurals. As Marshall is processing the crime scene, he has to request overtime for two detectives, and as luck would have it, one that shows up is Don Reihms (“if detectives had Yelp ratings, the best Rheims could hope for would be a one-star”). Meanwhile, Marshall’s wife is hardly sympathetic. After the murder of her uncle a year earlier, she’s been pressuring Marshall to retire, and his missing yet another date night to investigate a double-homicide isn’t helping matters. Through domestic realism, Brenham, himself a 20-year veteran of law enforcement, delivers a fully realized hero.

But ultimately, the duel between Marshall and his stalker is what makes Game Piece so addictive. As the killer strikes again and again, it becomes clear to Marshall’s colleagues that these crimes are intensely personal. Credit Brenham for putting the tremendous psychological weight of that responsibility squarely on Marshall, creating an investigation in which the stakes couldn’t be higher.