The Bottom Line: A deftly-written, all-American teen mystery deserving of a broad audience.

When a Minnesota Alzheimer’s patient implies knowledge about an unsolved death dating back to the 1960s, his 15-year-old granddaughter launches an investigation. 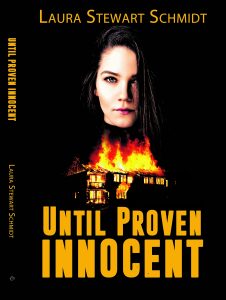 Until Proven Innocent begins as a local university is buying the former home of Henry Springs, who disappeared after a fire claimed the lives of his wife and daughter some five decades years before. Meanwhile, Alison’s grandmother is moving her ailing husband into a nursing home. During the emotionally difficult move-in day, he remarks, “I know why you did this. You don’t want another Spriggs tragedy.”

Grandma passes the comment off as dementia-fueled nonsense, but Alison knows better. She soon convinces her brothers to explore the Spriggs’ place, which, as local legend had it, is haunted. The trail then leads to an investigation of old newspaper clippings, revealing that their own grandmother was babysitting at the Spriggs residence the night of the fire.

From the get-go, Laura Stewart Schmidt’s teen mystery is full of potential villains. Is Alison’s grandmother sending her husband away because she fears he can no longer keep her secret? Or is the real killer still alive? Could Henry Spriggs still be hiding out nearby?

With the Spriggs home slated for demolition in just two weeks, and Alison’s grandfather’s mind in a state of rapid decay, the window of opportunity is rapidly closing. The question of whether the ramblings of an Alzheimer’s patient can be trusted is incredibly effective. In an era where dementia is skyrocketing, Schmidt has tapped into a new form of unreliable testimony that is frighteningly real.

Although set in summer, the threat of Minnesota’s past, present and future weather creates a palpable backdrop for this most intriguing of cases, literally juxtaposing fire and ice.

Unlike the adult themes present in much of what passes for teen mystery genre today, Schmidt keeps it clean, delivering a mystery appropriate for all ages that feels both classic and contemporary. Among a tidal wave of dystopian YA thrillers and damaged teen protagonists, a well-crafted tale featuring well-meaning kids who love their grandparents seems downright radical. Highly recommended.

The novel is available in pre-release directly from Black Rose Publishing.