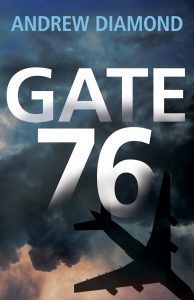 34-year-old private detective Freddy Ferguson, a man still largely defined by his former career as a prize fighter, is waiting to board a flight to Washington D.C. when he spots Anna Brook. She is attractive in a hassled sort of way, but it’s her interaction with her male companion – a knucklehead gripping her arm in an unkind way – that really grabs Ferguson’s attention. He watches as she prepares to board a flight to Honolulu, only to emerge from the jetway at the last minute, change her appearance, and catch a flight to Chicago.

By the time Ferguson lands in Dulles, news of a plane crash – the very same one that Brook nearly boarded – is on CNN. The world believes Brook is dead. Only Ferguson knows the truth.

Writing from Ferguson’s point of view, Author Andrew Diamond’s first person, present-tense narration is a breath of fresh air in a genre where the narrative voices are all too homogenous. Not since Thom Jones’ The Pugilist At Rest has a writer so eloquently incorporated the physical and mental toll of boxing in a protagonist’s life journey. As PIs go, Ferguson is as world weary as you might expect, but much funnier:(“I get premonitions… I see some guy walking down the street—never laid eyes on him before—and I just know he’s gonna be beating the crap out of me in an alley before the day is over.”) For a young man, he’s decidedly old school, from his puzzlement at the “younger folks” taking photos at a funeral to the way he carries a toothpick and uses it as a low budget burglar alarm. The result is a story that feels timeless – it could have been set in any era over the past six decades – but still completely of this world.

Compared to Diamond’s excellent cyber-crime novel Impala, Gate 76 is a bona-fide big tent crime thriller that should connect with readers from all walks of life. Let’s hope Diamond is planning an entire series around Freddy Ferguson.