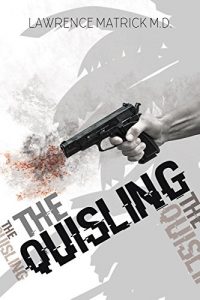 While author Lawrence Matrick juggles a large cast, The Quisling is primarily focused on three well-drawn characters: psychiatrist Dr. Zack Scarlatto, who is focused on extracting himself from the Mexican cartels in one piece; Zack’s sexy mistress, Maria, step-daughter of the Cartel leader; and Maria’s husband, Carlos (the “quisling”), a traitor on the run.

In an era where thrillers about Latin American drug cartels are all the rage, Lawrence Matrick’s novel is distinguished by its depth and highly illustrative prose. Compared to an overstuffed epic like George R. Martin’s Game of Thrones, The Quisling is relatively light fare, but it’s hefty compared to many contemporary action thrillers. Keeping track of businessmen, plastic surgeons, lawyers and the others inhabiting this detail-rich world could be taxing, but thankfully, Matrick’s characters do the unexpected more often than not.

Throughout, the Romeo and Juliet-inspired plot between Zack and Maria is more than enough to keep The Quisling firing on all cylinders. It’s a deliberately strange relationship, which crystallizes as the esteemed psychiatrist loses it at the first sound of gunfire, only to be comforted by Maria, who seems half-mad as she observes a savage raid on her family’s beachfront property near Acapulco: “There’s Salazar, my stepfather, that fat, pervert pig who used me when I was young. He’s dead, for sure.” And Maria isn’t the only one whose dialogue will have readers drooling in anticipation virtually every time they appear. This is far from the weirdest way Zack and his cronies catch up: “How’s the micro-surgery going—the Frankenstein stuff—the facial transplants?”

Overwhelming at times, Lawrence reigns in The Quisling when he needs to, managing storylines and shootouts as the book progresses. The psychological backbone of the book is an interesting and unique twist, setting it apart from the flood of ripped-from-the-headline cartel thrillers.

Gate 76, One of the Year’s Best Thrillers, by Andrew Diamond
The President is Missing, a Political Thriller by James Patterson and Bill Clinton